The arrest comes as anti-American sentiment grows in Iran and days before a nuclear agreement goes into effect.

TEHRAN, Oct. 30 (UPI) -- Iran has detained an Iranian-American businessman, the fourth person with that dual citizenship currently being held in Tehran, a family friend said.

Siamak Namazi, a Dubai-based businessman in his early 40s, was taken into custody about two weeks ago. Intelligence officers found him at his mother's home and took him to Tehran's Evin prison, The New York Times reported, citing an unidentified person close to his family.

Namazi is a scholar, consultant and executive of Crescent Petroleum, a division of a United Arab Emirates conglomerate. He is the first person with dual Iranian-U.S. citizenship detained by Iranian authorities since Iran and six world powers reached a nuclear agreement in July.

Iran has not made an announcement of his arrest, and there has been no explanation of charges against him. The U.S. State Department offered no comment except an acknowledgement it is aware of the arrest.

Namazi's detention comes as the atmosphere in Iran returns to the strident anti-American sentiments seen prior to the agreement. His arrest also comes in the wake of the conviction of Washington Post reporter Jason Rezaian, an Iranian-American accused of leading a spy network within Iran.

It was hoped by U.S. officials they would be freed after the conclusion of the negotiations over the nuclear agreement, which lifted sanctions against Iran.

Iran does not recognize dual citizenship, and it is believed that despite the reform-minded outlook of Iranian President Hassan Rouhani, conservative hardliners within the government are attempting to complicate adherence to the international agreement. Namazi's arrest comes days before "Adoption Day," the agreed-upon date of the start of the dismantlement of Iran's nuclear infrastructure.

World News // 44 minutes ago
120-year record in jeopardy as Moscow sizzles under historic heat wave
A blistering heat wave that has been enveloping eastern Europe nudged its way into western Russia this week, challenging Moscow records that have stood for more than a century. 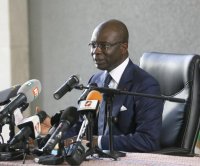