Study: Islamic State not only group looting antiquities in Syria

The Turkish YPG and the Syrian regime are also responsible for plundering valuable materials, the study says. 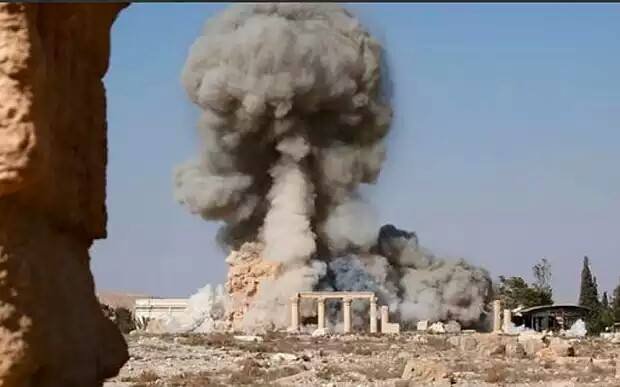 Islamic State supporters posted photos of the destruction of the ancient temple of Baal Shamin, or "Lord of the Heavens," in Palmyra, Syria, earlier this year. A new study suggests the Islamic State isn't the only group responsible for looting antiquities since the start of the country's civil war. Photo courtesy Syrian Department of Antiquities and Museums

HANOVER , N.H., Oct. 21 (UPI) -- The war-related looting of Syrian antiquities is typically blamed on the Islamic State, but other regional players are equally guilty, a scholarly study indicates.

An analysis by Dartmouth University scholars, published in the academic journal Near Eastern Archeology, reveals the Kurdish militant group YPG, the Syrian regime and other rebel organizations share responsibility for the pillaging of antiquities.

That's more than the amount of looted sites held by IS -- also identified as Daesh, ISIS and ISIL -- at 21.4 percent, and the Syrian regime, at 16.5 percent.

"Most media attention has focused on the spectacles of destruction that ISIS has orchestrated and posted online, and this has led to a widespread misunderstanding that ISIS is the main culprit when it comes to looting of archaeological sites and damage to monuments. Using satellite imagery, our research is able to demonstrate that looting is actually very common across all parts of Syria, and that instances of severe, state-sanctioned looting are occurring in both ISIS-held and Syrian regime areas," Casana said.

The study suggests the plundering of antiquities, the value of which leads to their overseas sale and to funding for political and military causes, is most prevalent where centralized authority is weakest, particularly in regions of Syria held by the YPG or other rebel groups. A total of 25 percent of archaeological sites in Syria have been looted since 2011.

The removal of antiquities has been illegal in Syria since prior to the civil war, but current methods involve the use of bulldozers and other heavy machinery. The study noted the most extreme phase of plundering at Apamea, a massive Roman-era city in western Syria looted beginning in early 2012, came after the area was secured by Syrian military forces.