Putin says U.S. should have given $500M to Russia instead of Syria rebels 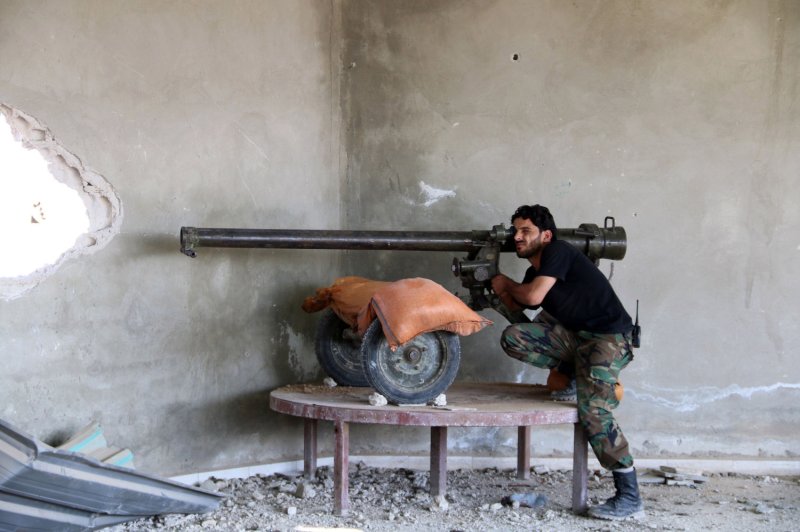 A syrian fighter from rebel groups called "Free Syrian Army," are seen as they take their positions during the fighting with the Syrian regime Army, in Ghouta, the Damascus countryside, Syria, Monday, Oct. 12, 2015. Russia has carried out airstrikes against Syrian rebels since September 30, 2015. Photos by Ammar Al Bushy/ UPI | License Photo

MOSCOW, Oct. 12 (UPI) -- Russian President Vladimir Putin on Monday criticized the United States government for pulling the plug on the Pentagon's $500 million plan to train rebel fighters in Syria as part of the Obama administration's strategy to combat terrorists there.

Putin made the remarks in a television interview, during which he also said Moscow's airstrikes are intended to back up Syrian President Bashar Assad's regime.

"Our task is to stabilize the legitimate government and to create conditions for a political compromise, by military means, of course," Putin said. "The units of international terrorists and their ilk have no desire to negotiate with the Syrian government, who is almost sieged in its own capital."

Last week, the Pentagon announced it would suspend a program to train Syrian rebels to fight terrorism that cost taxpayers $500 million. Monday, Putin said pulling the plug was the wrong decision.

"It would have been better to give us $500 million," Putin said. "At least we would have used it more effectively from the point of view of fighting international terrorism."

The Pentagon's decision came after it was learned that a Syrian rebel commander, who was supposed to fight on behalf of the U.S. government, handed over military equipment to an al Qaeda operative and defected.

Putin also said Monday that his country's airstrikes are designed to stabilize the political climate in Syria -- and that they will continue until that goal is met.

"Our task is exclusively to stabilize the legitimate government and create conditions for finding a political solution," he said.

Although Russian officials have stated their goal is to combat terrorism, some have said Moscow has also been fighting non-terrorist groups whose intent is to overthrow Assad's regime -- a plan U.S. officials have suspected for weeks.

Prior to a meeting on Syria by European Union ministers in Luxembourg on Monday, Feredica Mogherini, EU foreign affairs chief, called Russia's involvement in Syria "a game changer."

"It has some very worrying elements. The interventions against Daesh have to be clearly against Daesh and other terrorist groups, as defined by the UN," she said.

Putin, however, said Moscow is not considering placing ground troops in Syria.

World News // 4 hours ago
China tells the U.S. to 'stop interfering' in Beijing Olympics
Jan. 27 (UPI) -- China's top diplomat said the United States should stop meddling in the upcoming Beijing Winter Games and warned against "playing with fire" on the Taiwan issue on Thursday.

World News // 19 hours ago
Gas leak explosion in Athens, Greece, injures at least one
Jan. 26 (UPI) -- At least one person has been injured in a powerful blast that occurred in central Athens, Greece, on Wednesday.
Advertisement