Plans for the reunion have continued unabated despite threats from North Korea about Seoul’s interference with Pyongyang’s satellite launch program and nuclear test ambitions. 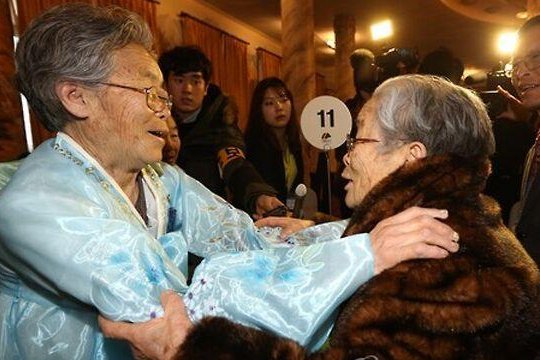 North and South Korea have agreed to family reunions in late October and exchanged final lists on Thursday. File Photo by Yonhap

SEOUL, Oct. 8 (UPI) -- North and South Korean Red Cross officials exchanged the final list of family members to be reunited at the truce village of Panmunjom, more than three weeks after an initial meeting.

The list has been significantly pared down on both sides, Yonhap reported. In September, North and South exchanged lists, each with 200 names, but on Thursday the roster had been cut down to 90 South Korean and 97 North Korean participants.

"Because of the reckless anti-[North Korea] confrontational racket of the South, the rare reunions of separated families are at stake, like being on a thin ice," a spokesman for the North's Committee for the Peaceful Reunification of Korea had said in a past statement.

For many of the participants, the reunion would be their last opportunity to meet with aging relatives and reconcile complicated personal histories that led to separation.

Jo Sun-jeon, 83, told Yonhap on Thursday all her relatives in the North had died but that she would be able to meet with younger siblings. Jo said she was separated from her older sisters after the 1950-53 Korean War broke out. Her sisters, worried about their aging parents, made the tough decision to return to the communist North, and Jo never saw them again.

Other South Koreans, including An Yun-jun, 86, said he was separated by circumstance. When North Korean tanks crossed the 38th parallel, An was in Seoul attending a military academy and could not return to his hometown of Anju, in South Pyongan province.

Families of the Korean diaspora also are scheduled to meet in late October. Park Yeon-dong, 90, said his family was recruited as forced laborers on Japan-occupied Sakhalin Island during World War II. The family remained in the territory until 1963, when his younger brother left for Pyongyang to study medicine. Communication stopped 10 years later, Park said, and his brother died in 2011. Park said he would meet instead with two nephews, both in their 40s.