The Taliban captured the strategic northern city in the most significant urban victory for the insurgents since their fall from power in 2001. 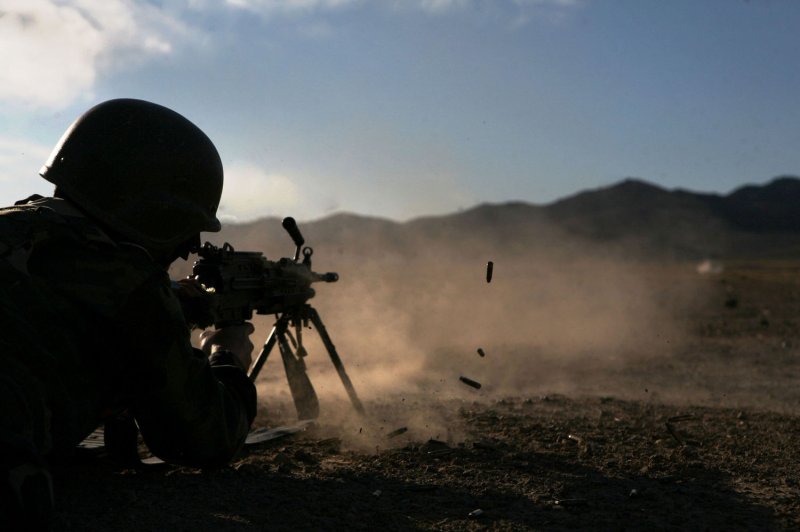 Brass is ejected from the M249 Squad Automatic Weapon fired by an Afghan national security force member during combat marksmanship practice in Now Zad, Afghanistan on Jan. 1, 2010. The Afghan military on Sept. 29, 2015, counter-attacked Taliban positions in the city of Kunduz, northern Afghanistan, after the militants seized the strategic town one day prior. Photo by Zachary J. Nola/U.S. Marines | License Photo

KUNDUZ, Afghanistan, Sept. 29 (UPI) -- The Afghan military on Tuesday began fighting to regain the strategic northern city of Kunduz one day after it was captured by Taliban forces.

The BBC quoted Afghan President Ashraf Ghani as saying security forces had seized several buildings, and police as saying up to 80 militants had been killed, though the figure was not independently verified.

The Taliban launched their attack early Monday, descending from several directions before security personnel fled. Kunduz, a Taliban stronghold before the group's fall from power in 2001, is the capital of the wider Kunduz province, which supplies half of the country's rice and holds major roads connecting central and northern Afghanistan.

U.S. military officials confirmed launching at least one airstrike in support of the operation and Tuesday expressed optimism of an Afghan military victory, but Pentagon Press Secretary Peter Cook acknowledged the loss of Kunduz was a "setback."

"The government of Afghanistan is an accountable government and cannot bombard inside the cities, and it will not," the Times quoted Ghani as saying.

Meanwhile, Medecins Sans Frontieres, or Doctors Without Borders, told reporters the main trauma center in the city was overwhelmed with gunshot victims over the past two days. The organization told the Times on Tuesday it had received 171 injured, including 46 children.

The BBC quoted the Afghan Health Ministry as saying it received up to 200 injured, as well as 16 bodies.

Militant attacks in Afghanistan have been on the rise since NATO forces officially handed the combat mission to Afghan forces last year.

The Taliban has fought back-and forth battles with government troops and police across the country throughout the summer as part of the traditional spring and summer fighting seasons, but U.S. and Afghan officials in June estimated casualties among Afghan security personnel during the first 15 weeks of 2015 were 70 percent higher than in the same period last year, with about 330 being killed weekly.

The counterattack in Kunduz comes two days after hundreds of Islamic State militants were for the first time reported to have attacked security personnel in Afghanistan, assaulting police checkpoints in the Nangarhar province.

World News // 32 minutes ago
Dutch airline KLM faces suit over 'greenwashing'
May 24 (UPI) -- Environmental groups have filed suit against KLM, alleging the Dutch airline has falsely claimed to be environmentally sustainable in advertising to improve its image, which is greenwashing.

World News // 4 hours ago
Band of gunmen attack hotel, 2 bars in central Mexico; 11 killed
May 24 (UPI) -- Mexican police are searching for a group of gunmen who opened fire on a hotel and two bars late Monday, killing nearly a dozen people.

World News // 5 hours ago
Hong Kong cardinal denies failing to register fund that helped dissidents
May 24 (UPI) -- Cardinal Joseph Zen of Hong Kong, along with five other people, denied charges in court on Tuesday that they failed to register a relief fund that was assisting protestors who faced legal and medical fees.

World News // 8 hours ago
Biden, Quad leaders pledge 'free' Indo-Pacific amid 'dark hour' in Russia-Ukraine war
SEOUL, May 24 (UPI) -- U.S. President Joe Biden and his counterparts in the Quad met in Tokyo on Tuesday and vowed to work together for a "free and open Indo-Pacific" in an alliance designed to contain China's assertiveness in the region.

World News // 8 hours ago
Russia attacks dozens of towns in east Ukraine; 200 bodies found in Mariupol
May 24 (UPI) -- Ukrainian authorities said Tuesday they have discovered about 200 bodies beneath the debris of an apartment building in Mariupol, the southern port city that's been targeted for weeks by Russian forces.

World News // 11 hours ago
Biden: Taiwan policy of 'strategic ambiguity' has not changed
SEOUL, May 24 (UPI) -- A day after sparking outrage by claiming the United States would intervene militarily to protect Taiwan, President Joe Biden said Washington's policy of "strategic ambiguity" toward defending the island had not changed.