Venezuela is facing a worsening economic crisis where shortages of basic goods and hours-long queues for purchases are common. The country has the fastest annual inflation rate in the world, estimated between 80 to 120 percent. Pictured: Venezuela's national currency, the bolívar. File Photo by Devin_Pavel/Shutterstock

CARACAS, Venezuela, Aug. 19 (UPI) -- Francisco Martínez, president of the Venezuelan Federation of Chambers of Commerce (Fedecámaras), has warned that the country is in urgent need of economic reform, adding that the upcoming parliamentary election should not obstruct efforts.

Martínez is calling for the government of President Nicolás Maduro to create economic measures as Venezuela faces a worsening economic crisis. He warns that government inaction due to fears of decreasing its popularity ahead of the Dec. 6 parliamentary elections is a mistake.

The South American country has the fastest annual inflation rate in the world, estimated between 80 percent to 120 percent.

Martínez is calling for "pragmatism" and "realism" to triumph over "ideology" -- adding that "radicalism leads us nowhere." He is urging for cooperation and consensus between the government, workers and employers.

"We can agree on what, but we also have to agree on how, which will allow the national agreement," Martínez said on creating measures to stem Venezuela's economic deterioration, where shortages of basic goods and hours-long lines for purchases are common.

The economic crisis has further escalated tensions between Fedecámaras and Venezuela's socialist government.

Fedecámaras hopes to introduce a consolidated economic plan to Venezuela's parliament, but Diosdado Cabellos, president of the National Assembly of Venezuela, recently said that any plans proposed by Fedecámaras will not be accepted -- a move condemned by Ricardo Cusanno, Fedecámaras second vice president.

"Through this plan we want to achieve that wages last, pensions will reach our grandparents to buy their medicines. That there will not be shortages or long queues," Cusanno said.

Martínez also called for the Central Bank of Venezuela to fulfill its "constitutional commitment" by increasing transparency and by releasing the country's official economic projections, as the failure to do so increases uncertainty in Venezuela that does not promote stability and discourages investment.

The inability for markets to create accurate financial projections with official figures means businesses have to resort to alternatives such as websites and economists, according to Martínez. Companies are unable to sign contracts or make long-term investments without knowledge of Venezuela's macroeconomic situation.

"It's like driving a car with your eyes closed," Martinez said. "The damage done to the country is worse than the recognition of the inflation problem."

Fedecámaras issued a statement calling for the Central Bank of Venezuela to publish the official estimates:

"The Central Bank of Venezuela now meets eight months without publication and submission of periodic reports on the behavior of the macroeconomic variables of the country, which violates the law governing the central bank and the constitution," Fedecámaras said, adding that the bank is "a key institution for macroeconomic stability and consistency, and should resume their primary role as rector of monetary policy and the guarantor of price stability." 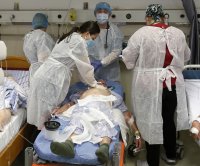 World News // 9 hours ago
North Korea suggests it may resume ICBM, nuclear tests
SEOUL, Jan. 20 (UPI) -- North Korean leader Kim Jong Un said it was time to "examine the issue of restarting all temporally suspended activities" in an apparent reference to lifting its moratorium on long-range missile and nuclear weapons.