Shots fired by two gunmen at U.S. Consulate in Istanbul 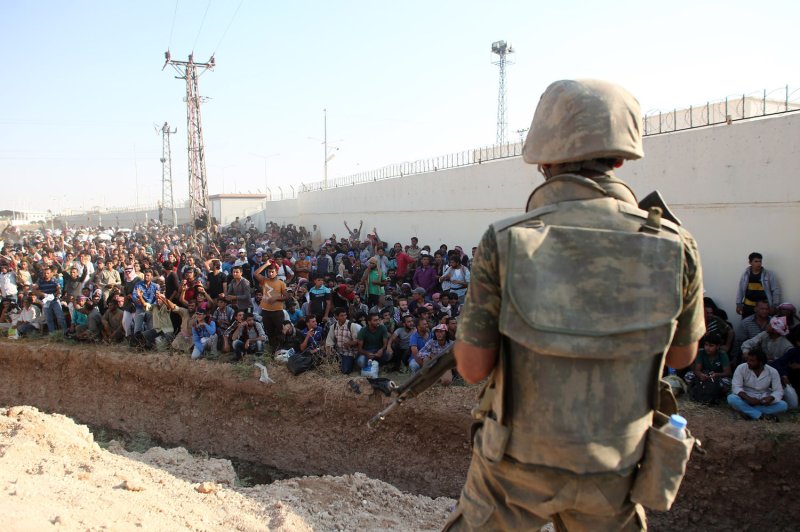 Turkey has been attacked on its border with Syria by both the Islamic State and by the Kurdish Workers Party militant group, also known as the PKK. Pictured: Turkish soldiers guard while hundreds of Syrian refugees wait at the Syrian side of the border crossing in Akcakale, Sanliurfa province, south-eastern Turkey, June 14 2015. They are trying to cross to the Turkish side as they are fleeing from the fighting between the Kurdish People's Protection Units (YPG) military group and Islamic State (ISIS). File Photo by Ebrahem Khadir/ UPI | License Photo

ISTANBUL, Turkey, Aug. 10 (UPI) -- At least six Turkish security officials were killed in a wave of attacks that began early Monday, in which the U.S. consulate in Istanbul was also an apparent target.

In the Sirnak province, at least four police officers were killed by an explosion on a road. One soldier was later killed after gunmen opened fire on a military soldier.

In Istanbul, an attack was carried out on a police station that first began with a car bomb and then by gunmen opening fire. At least one policeman was killed and 10 others were injured. Two attackers were killed when police returned fire.

The U.S. consulate in Istanbul seems to have also been targeted by at least two gunmen. One was detained, reportedly a woman, and the other is sought by authorities. No one was hurt in the consulate attack.

Incident this AM near US Consulate Istanbul. Working w/ Turkish authorities to investigate. Consulate closed to public till further notice.

It is not yet known if the attacks are connected.

There has been no immediate claims of responsibility for the attacks, but the Turkish government is currently facing a violent struggle against the rebel group Kurdistan Workers' Party, known by its Kurdish initials PKK, and the Islamic State.

World News // 6 hours ago
Iceland holds elections with a record number of parties expected to take power
Sept. 25 (UPI) -- Icelanders went to the polls on Saturday with a record nine parties likely to be seated in the country's parliament.

World News // 10 hours ago
Indian PM Modi touches on Afghanistan, pandemic in U.N. address
Sept. 25 (UPI) -- Indian Prime Minister Narendra Modi touched Saturday on the the situation in Afghanistan and the COVID-19 pandemic, among other issues in his U.N. address.