North Korea-made weapons are being traded in the Middle East despite heavy U.S. and U.N. sanctions against Pyongyang. 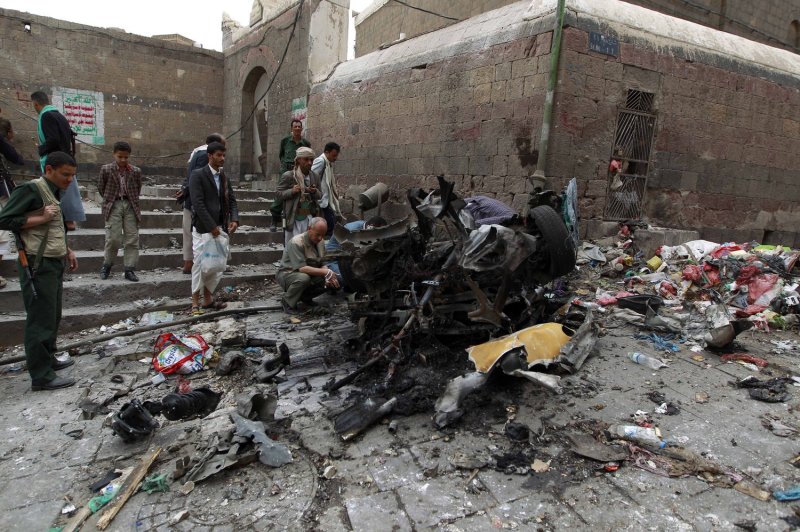 Houthi fighters inspect the wreckage of a car at the site of an attack near of Qubbat al-Mahdi Mosque in Sanaa, Yemen, on June 20. The rebels have been firing Scud missiles of North Korean origin into Saudi Arabia. File Photo by Mohammad Abdullah/UPI | License Photo

The missiles identified in the attacks against Saudi Arabia were the same as the Scud-C, or Hwasong-6 missiles featured in past North Korea military parades, South Korean television network SBS reported.

North Korea also has been linked to the Islamic State as a weapons supplier, South Korea press reported.

Saudi Arabia has been able to shoot down around 40 percent of the 20 Scud missiles that Yemen's Houthi rebels have fired into the neighboring country, Yonhap reported.

The South Korean intelligence official, who spoke to Yonhap on the condition of anonymity, said he could not give additional information.

North Korea-made weapons are being traded in the Middle East despite heavy U.S. and U.N. sanctions against Pyongyang.

But the international ban against individuals who help North Korea trade weapons of mass destruction – including nuclear arms and ballistic missiles – has not prevented Pyongyang's arms from being actively acquired by fighters in regions of heavy conflict.

An unidentified defector and former North Korean official said that North Korea has sold missiles to Yemen and dispatched missile engineers to the country since the 1990s.

SBS reported the Saudi government believed the rebels had procured their Scud missiles from Iran.

World News // 10 hours ago
25 killed after hundreds of inmates escape Haiti prison
Feb. 27 (UPI) -- Twenty-five people died after more than 200 prisoners escaped from a prison in Haiti, including a gang leader and the prison's director.