A drought and a shortage of hydroelectric power are taking a toll on the isolated country. 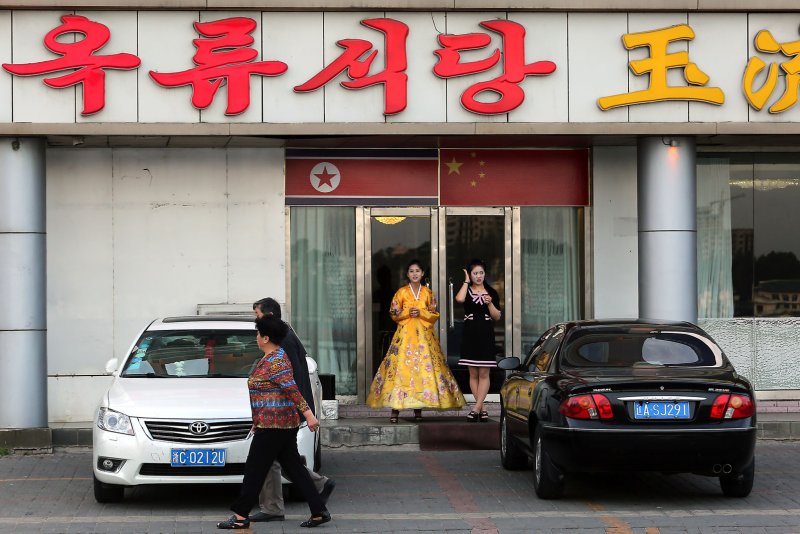 A North Korean woman and hostess stand outside a North Korean restaurant waiting for customers in Dandong, China's largest border city with North Korea, in Liaoning Province, on May 30. In North Korea, restaurants like these have been ordered to shut down in the afternoon and evening due to the high heat and electric power shortage. Photo by Stephen Shaver/UPI | License Photo

SEOUL, July 23 (UPI) -- Power shortages and a hot summer mean working North Koreans and schoolchildren must wake up before sunrise, according to a source in the country, but North Korea claims specialty foods can beat the heat for many.

Workers must now report for duty at 5 a.m. as summer reaches peak temperatures, and children must get ready for school at 4 a.m., South Korean news outlet Daily NK reported Thursday.

"Many [schoolchildren] are unable to get up, so they end up skipping one or two hours of class, pulling down the attendance rate," the source said.

The average summer temperature in Pyongyang is 84 degrees Fahrenheit. Humidity adds to the heat, and a power shortage in North Korea means indoor workers have no access to fans or air conditioners.

Businesses, factories and offices begin operations at 5 a.m. to comply with the state's ordinance, and shut down at 1 p.m.

The schedule is in effect for a month and began on July 20, according to the source.

State-owned restaurants stay open until lunchtime and close in the afternoon. Diners away from home are said to have criticized the shutdown.

North and South Korea observe the monthlong period of high heat, but a drought and a shortage of hydroelectric power are taking a separate toll on the isolated country.

The period, also known as Sambok, comes with traditions that include the consumption of special foods.

South Korean news network Yonhap TV reported dog meat restaurants in Pyongyang draw a "full house" every day during the summer because of its restorative properties.

Chon Song Nam, a member of the People's Committee in Pyongyang, said dog meat is a traditional Korean food that is frequently boiled in soups.

"Isn't there a saying that even if a drop of dog meat soup falls on your foot, it becomes medicine?" he said on North Korean state television.

World News // 2 hours ago
U.S., Britain, EU form group to aid Ukraine on war crimes probes
May 25 (UPI) -- The United States with Britain and the EU announced the creation of the Atrocity Crimes Advisory Group, which aims to bolster Kyiv's efforts to investigate Russian war crimes and to prosecute those responsible.

World News // 6 hours ago
Hyundai recalls 239,00 vehicles over exploding seat belts
May 25 (UPI) -- Hyundai has recalled some 239,000 vehicles over reports that seat belts may explode "abnormally" during a crash.

World News // 8 hours ago
Former Pakistani PM leads march into Islamabad demanding new elections
May 25 (UPI) -- Former Pakistani Prime Minister Imran Khan followed through with his march to the capital of Islamabad Wednesday, leading to a crackdown on crowds by police and military.

World News // 15 hours ago
Partygate: Gray report slams British PM Boris Johnson, others for breaking COVID-19 rules
May 25 (UPI) -- A damning report was released Wednesday that said British Prime Minister Boris Johnson and other officials violated COVID-19 restrictions in 2020 and 2021 by having social gatherings in a scandal known as "partygate."