President Muhammadu Buhari said the replacements were chosen based on merit. 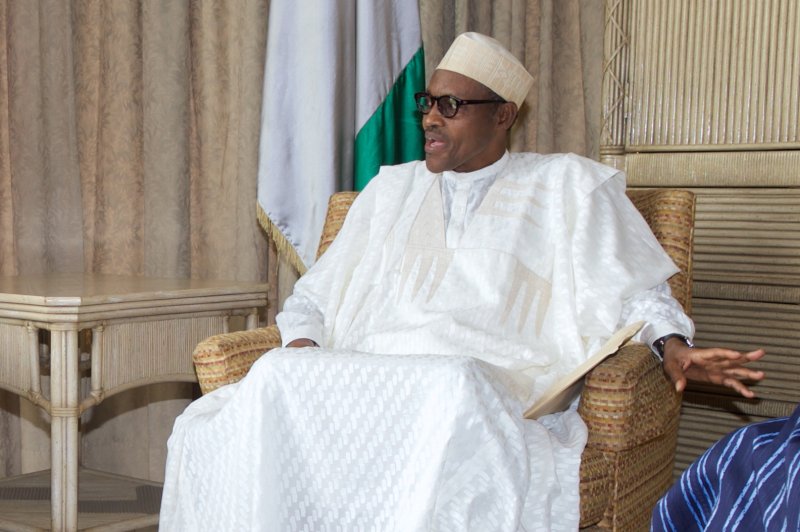 Nigerian President Muhammadu Buhari sits at the U.S. Consulate General's Residence in Lagos, Nigeria, during a series of meetings on Jan. 25, prior to his election in March. On Monday, Buhari sacked several top military chiefs, replacing them with merit-based candidates, following a wave of attacks by terrorist group Boko Haram that have killed hundreds in Nigeria and surrounding countries over the past two weeks. Photo courtesy of the U.S. State Department

Buhari fired the country's army, navy, air force and intelligence chiefs, along with its defense staff chief, air marshal and national security adviser, replacing them with merit-based candidates, according to Nigerian media.

Two of the candidates -- Chief of Army Staff Maj. Gen. Tukur Yusuf Buratai and National Security Adviser Maj. Gen. Babagana Monguno -- are from Borno State, where a majority of attacks by Islamic terrorist group Boko Haram have been focused.

"President Buhari thanks the outgoing service chiefs and national security adviser for their services to the nation and wishes them well in their future endeavors," Vanguard quoted Femi Adesina, the president's special adviser, as saying in a statement.

The replacements, announced Monday, come amid a wave of Boko Haram attacks that have killed more than 250 people in Nigeria over the past two weeks, including a blast in Zaria on July 7 that killed 25 people.

Buhari has long been critical of the military's inability to defeat Boko Haram, but the BBC's Bashir Sa'ad Abdullahi, reporting from Abuja, notes analysts blame the recent uptick in attacks on the president's decision to abolish military checkpoints on the grounds that internal security is a police responsibility.

Buhari won election in March pledging to combat corruption and defeat Boko Haram, which has since 2009 waged a campaign of terror and warred with the Nigerian government -- as well as military forces in neighboring Chad, Niger and Cameroon -- in order to establish an Islamic state.

Nigerian media sources estimate at least 600 people have been killed since Buhari took office on May 29.

Amnesty International estimates at least 17,000 people, mostly civilians, have been killed in Nigeria since the Sunni extremist group launched its insurgency six years ago.

According to the Vanguard, the sacked air marshal and army, navy and air force chiefs had been appointed by former President Goodluck Jonathan in January 2014 after he fired the officers who previously held those positions.

The newly appointed chiefs will hold their positions in an acting capacity until confirmed by the senate, according to Adesina's statement.

The United States last month announced it would provide $5 million to help fund an African Union coalition -- comprising up to 7,500 troops from Nigeria, Chad, Niger, Cameroon and Benin -- in its fight against Boko Haram.

The regional force is due to be deployed later this month after a commander is appointed, Vanguard quoted Adesina as saying.

World News // 21 hours ago
Hezbollah faces rising dissent, efforts to end Iran's 'occupation' of Lebanon
BEIRUT, Lebanon, Jan. 21 (UPI) -- Lebanon's financial collapse, which has pushed many into poverty, has also seen growing anger against Hezbollah, with more voices openly blaming it for the ongoing crisis and for its allegiance to Iran.