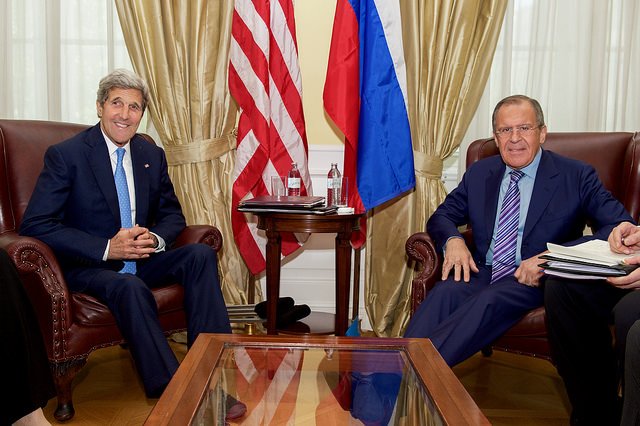 U.S. Secretary of State John Kerry shares a laugh with Russian Foreign Minister Sergey Lavrov on June 30 in Vienna, Austria. The two nations are working together to fight terrorism. Photo courtesy of the U.S. State Department

The objective "to unite the efforts of our two countries in the region more effectively," Lavrov told reporters on Monday, underscored the need to end the scourge of Islamic terrorism.

The foreign minister also underscored the "push for joint practical action," which included the potential creation of a coalition, which will be comprised of regional and non-regional players, Russia Beyond the Headlines reported.

"The situation in the region requires more active measures," Kerry said, adding that "all those who believe that ISIS is an absolute evil" should work collectively to combat the threat.

When Russian President Vladimir Putin assumed power in 2000, he set in motion a counterterrorism initiative against Islamic militants, which have largely been present throughout the North Caucasus region. Moscow remains concerned about the growing number of jihadists from Russia and Central Asia. Many now fight with the Islamic State.

On Monday, Putin met with Syrian Foreign Minister Walid al-Moallem to pledge his support for President Bashar Assad and called on all Middle East nations to "pool their efforts" to fight the IS. Putin underscored that Russia's "policy to support Syria, the Syrian leadership, and the Syrian people remains unchanged."

The U.N. has estimated that 220,000 Syrians have been killed since the conflict began in 2011. IS factions now control parts of Damascus.

IS expanded its reach to Russia after declaring a governorate in the country's North Caucasus region in the past few weeks.