His grandfather became obese around the same age as Kim Jong Un and lived to be 82, North Korea specialist Charles Armstrong told UPI.

Yonhap identified the suit Kim Jong Un wore as a people’s style of uniform widely worn in North Korea. Kim left the top half of his suit unbuttoned, prominently displaying his plump silhouette and bulging stomach. Photo by KCNA/Yonhap

SEOUL, June 3 (UPI) -- North Korean leader Kim Jong Un's chronic weight gain is drawing concern, but it may not be linked to a serious illness, an analyst told UPI on Wednesday.

North Korea's state-controlled media outlet KCNA released photographs of the rotund leader on Monday. The images showed Kim touring a wheat field at Farm No. 1116 under the supervision of Korean People's Army Unit 810. The Telegraph reported Kim was wearing a panama hat and straining the seams of his suit – signs he has visibly put on weight since the death of his father.

Yonhap identified the suit Kim wore as a people's style of uniform widely worn in North Korea. Kim left the top half of his suit unbuttoned, prominently displaying his plump silhouette and bulging stomach.

Toshimitsu Shigemura, a professor at Tokyo's Waseda University, told The Telegraph that Kim's health is not good, and that "if he is taken seriously ill then there is the possibility of instability or even a coup by elements of the military."

Shigemura also said Kim's older brother Kim Jong Nam is likely to take the leadership position because of the significance of the Kim family bloodline.

Kim Jong Un might not be at the risk of illness, however, according to Charles Armstrong, a professor of Korean studies at Columbia University.

Armstrong told UPI that there is no indication so far that Kim's weight gain has anything to do with serious illness.

"His grandfather became quite heavy around the same age as Kim Jong Un is today, and lived to be 82 years old," he said.

Kim Jong Un's weight gain offers a stark contrast to the physique of other North Koreans who are seriously undernourished.

According to the United Nations, 70 percent of the North Korean population is "food insecure," and the international body has warned of a drought that could lead to food shortages. 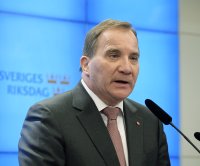