Hundreds of pro-government forces retreated from the city on Sunday, leaving behind dozens of military vehicles and other equipment to advancing Islamic State militants. 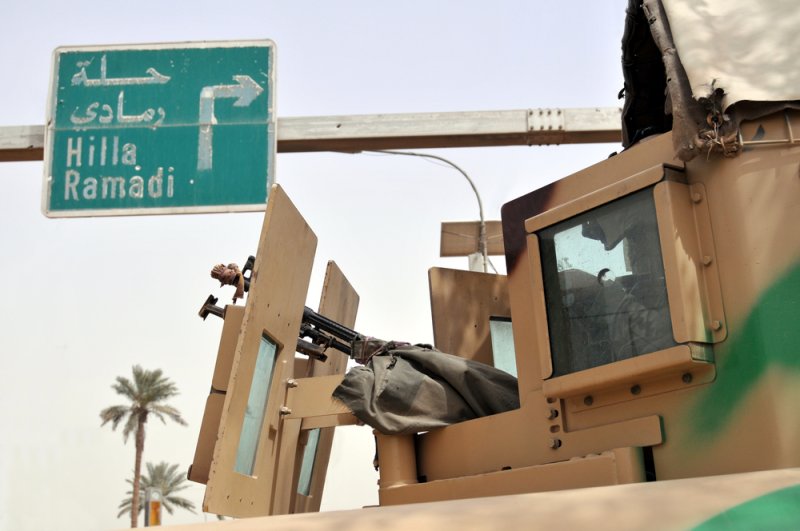 An armored vehicle in position next to a road leading to Hilla and Ramadi in central Iraq. On May 17, 2015, officials reported hundreds of pro-government forces had fled Ramadi in the face of an Islamic State assault, leaving a garrison besieged within the city and caches of weaponry and vehicles -- some of which was supplied by the United States -- in militant hands. Baghdad has mobilized Shia militias to help retake the majority Sunni Muslim city in Iraq's west. Photo by Frontpage/Shutterstock

RAMADI, Iraq, May 17 (UPI) -- Islamic State forces control a majority of the capital of Iraq's Anbar province, Ramadi, after hundreds of pro-government forces retreated on Sunday, according to police and tribal fighters.

Despite reports from Iraqi officials last month that pro-government forces had taken key areas of the city's west, IS forces pressed a new assault on Thursday. Driving Humvees and dressed in Iraqi army uniforms, the militants used heavy shelling and car bombs against police headquarters and the governor's office, killing 10 police officers and capturing 50.

By the next afternoon, IS forces raised their flag over the governor's office.

However, on Sunday, Col. Nasser al-Alwani of the Ramadi police force told the Washington Post that about 500 police personnel, soldiers and pro-government tribal fighters retreated from Ramadi's Malaab neighborhood, leaving behind 60 military vehicles, including Humvees, as well as military equipment, such as artillery and machine guns, that had been sent by the Baghdad government on Saturday to reinforce the area.

Most of Ramadi is now in IS hands. A force of several hundred pro-government forces are surrounded within the city in a military operations facility where up to 40 people were reportedly killed in two suicide bombings on Sunday.

"Only God can help those people now. There is no one left to protect them," Omar al-Alwani, a pro-government tribal fighter from Ramadi, told the Post. He added that the eastern roads leading to Baghdad are now undefended.

Meanwhile, Anbar's provincial council voted Sunday to allow Shia militias to help take Ramadi back as Abadi announced the move on state-run television. An official in one of the Iran-backed militias, known locally as "popular mobilization units," confirmed to the Post his group's mobilization.

The move is considered controversial in Sunni-dominated Anbar province. Shia militias were instrumental in the recapture of the Sunni city of Tikrit from IS forces last month, but they had to be withdrawn amid reports of illegal executions, arson and looting.

Baghdad was slow about the removal, since, according to The New York Times, the militiamen's willingness to fight generally outweighed that of the regular army.