The facility has been under assault since June 2014.

BAIJI , Iraq, May 7 (UPI) -- A new Islamic State assault on a key oil refinery at Baiji, Iraq, began Thursday, and Pentagon officials are concerned it will soon fall into enemy hands.

Control of the refinery, Iraq's largest, has been contested for weeks between Islamic State forces and the Iraqi military. IS has reinforced positions around the city since its failure to hold the city of Tikrit. Baiji is about 200 kilometers (120 miles) from Baghdad.

"The Baiji refinery is threatened," said Pentagon spokesman Col. Steve Warren. "Enemy forces have put a tremendous amount of pressure on friendly forces in Baiji." He added IS forces control some, but not all, of the refinery complex, but a senior official, referencing Iraqi security forces, said the entire complex was about to fall into enemy hands.

Both IS and Iraqi forces regard the refinery as crucial to the control of Iraq's infrastructure and economy, as well as influence over a key military supply line to Mosul, a city now in IS hands. The refinery has been severely damaged in the fighting, though, with repairs expected to take up to a year, and Pentagon officials suggest IS could not operate the facility even if it can be captured.

"I don't know the refinery itself will be able to provide any material benefit to the enemy," Warren said. The complex formerly produced 300,000 barrels of refined oil products per day, but its output has been reduced since IS began its siege in June 2014. The attack was repelled later in the year, but IS regained a foothold in the refinery in April 2015.

World News // 3 hours ago
UAE becomes one of few Middle East nations to change work week to Monday-Friday
Dec. 7 (UPI) -- The United Arab Emirates on Tuesday formally announced that it's shifting its official work week from Sunday to Thursday to Monday to Friday, becoming one of the few Middle Eastern nations to do so. 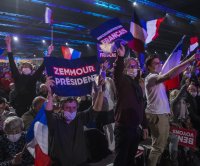