CARACAS, Venezuela, April 27 (UPI) -- Antonio Ledezma, the mayor of Caracas who has been jailed for allegedly conspiring against President Nicolas Maduro, was hospitalized over the weekend.

Mitzy Capriles, Ledezma's wife, wrote on Twitter Friday that her husband had been diagnosed with a groin hernia and required immediate surgery. She appealed to authorities to allow her husband to recuperate at home.

Ledezma was expected to undergo a hernia operation at a private hospital on Sunday.

A Caracas court granted a request by the Attorney General's office to transfer Ledezma to house arrest during his recuperation. It was unclear how long Ledezma would remain under house arrest and when he would be returned to jail.

The opposition leader was arrested in February for allegedly "conspiring against the peace and stability of the nation" and was formally charged with conspiracy on April 7.

Maduro has blamed the country's economic troubles on a conspiracy to overthrow him and has jailed opposition figures. Ledezma's arrest marked a continuation of the Maduro government's crackdown on opposition voices and has sparked international appeals for his release. 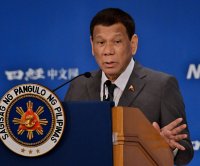 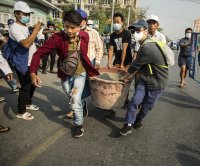