REYNOSA, Mexico, April 18 (UPI) -- A gun battle and rioting erupted as Mexican police were attempting to arrest an alleged drug cartel leader, leaving three dead in one of Mexico's biggest cities, the border town of Reynosa.

"The same criminal group reacted by attacking federal forces," officials said in a statement which described the dead men as "armed civilians."

Officials said vehicles were burned and gunmen stormed the area in an attempt to establish road blocks. It took several hours before the situation was brought under control.

An urgent message was issued to the residents in Reynosa as the violence erupted. Some of the main bridges that connect the U.S. and Mexico were closed. With more than 600,000 residents, Reynosa is one of the largest cities in Mexico and sits along the U.S. border near McAllen,Texas.

Authorities have been attempting to reign in the two main drug cartels in Reynosa, the Gulf Cartel and the Zetas. The two gangs battle for strategic smuggling routes and criminal activity.

"The city is completely out of control," said Francisco Javier García Cabeza de Vaca, an opposition senator and former mayor of Reynosa. 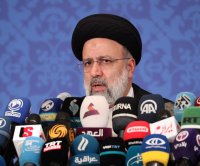