The incident follows a similar occurrence west of Britain in February and comes a week after a U.S. aircraft was intercepted by a Russian jet north of Poland in what U.S. officials described as a "unsafe and unprofessional" manner.

The RAF used Eurofighter Typhoons to escort the Russian aircraft away, but further details of the incident were not yet available.

The occurrence follows a similar scenario that played out west of Britain in February, when the RAF sent Typhoon jets to intercept Russian Tupolev TU-95 bombers flying near British airspace.

One week ago, a Russian SU-27 fighter jet intercepted a U.S. RC-135U in an "unsafe and unprofessional" manner as the reconnaissance plane flew in international airspace north of Poland, according to a Pentagon spokesman. Russian media reported the plane had flown close to the Russian border with its transponder off, which U.S. officials denied.

The incidents join a growing pattern of close encounters between Russian military aircraft and those of NATO powers.

The British Defense Ministry said the United Kingdom had intercepted over 100 Russian aircraft in 2014, while the European Leadership Network in November reported 40 "close military encounters between Russia and the West."

In the same month NATO said its members' jets had been scrambled over 400 times in 2014 in reaction to Russian military aircraft flying close to the borders of its member nations. That is a 50 percent increase over such incidents in 2013.

The rise has occurred parallel to Russia's military involvement in Ukraine. Moscow annexed Crimea last March and has been accused by the West of arming and supplying fighters to pro-Russian rebels in eastern Ukraine. Russian President Vladimir Putin has denied the charge, saying any Russians fighting in Ukraine are doing so voluntarily.

World News // 2 hours ago
Brother denies killed South Korean official had planned to defect
SEOUL, Sept. 29 (UPI) -- The brother of the South Korean fisheries official killed last week by North Korean soldiers criticized the government's response to the incident on Tuesday and denied allegations that his brother had intended to defect.

World News // 20 hours ago
Lebanon's fate linked to regional settlement
BEIRUT, Lebanon, Sept. 28 (UPI) -- Lebanon, stuck in an uphill struggle between the United States and Iran, will have to wait for a settlement in the region to regain some political and economic stability and deal with the growing influence of Hezbollah.

World News // 20 hours ago
64 nations vow to aid threatened animals in post-COVID-19 plans
Sept. 28 (UPI) -- Leaders in more than 60 nations pledged Monday to preserve threatened and endangered species by including concerns about climate change and biodiversity in their COVID-19 recovery strategies.

World News // 21 hours ago
South Korean labor unions agree to wage freezes
SEOUL, Sept. 28 (UPI) -- COVID-19 is having such a profound effect on South Korea's economy that even labor union members are agreeing to freeze wages at major conglomerates.

World News // 1 day ago
Judge rules Uber 'fit and proper' to operate in London
Sept. 28 (UPI) -- A London judge on Monday ruled that ride-share giant Uber can operate in the city, following months of legal gridlock. 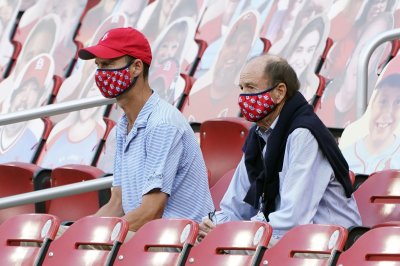