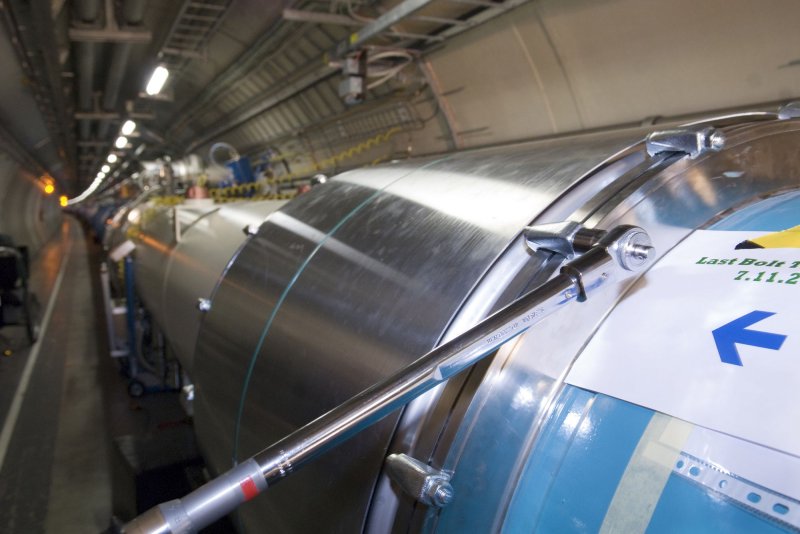 Handout image from the European Organization for Nuclear Research (CERN), two Large Hadron Collider (LHC) magnets are seen before they are connected together. The LHC simulates mini-Big Bangs allowing scientists to study theories of the dawn of time. File Photo by UPI/Maximilien Brice/CERN

GENEVA, Switzerland, April 5 (UPI) -- The world's largest and most powerful particle accelerator, the Large Hadron Collider, has begun running again after being shut down for more than two years.

"After two years of effort, the LHC is in great shape," CERN Director for Accelerators and Technology, Frédérick Bordry said. "But the most important step is still to come when we increase the energy of the beams to new record levels."

The 17-mile, $10 billion underground accelerator operated by CERN in Switzerland first started up in September 2008, but was shut down in February 2013 because 10,000 electrical interconnections between the accelerator's supercooled magnets needed reinforcement.

"We basically spent two years reinforcing these junctions, such that they can withstand anything that we can throw at them in terms of the energy of the machine," Paul Collier, head of beams at CERN, said.

Although the LHC restarted, it is not at full power. About two months will be used to steadily increase the machine's functions to ultimately gather collision data and perform true physics experiments.

"It's not like flipping a switch, that's for sure," Collier said. The energy of the particle beams circulating inside the accelerator should reach peak level by the end of 2015.

The accelerator is now 60 percent more powerful than it was in 2012.

"What we've put together is almost a new machine," Collier said. "And, of course, we're also booting it into a new regime in terms of the power of the machine -- the energy at which the beams collide."

In 2012, scientists used the LHC to confirm the existence of the Higgs boson, or Higgs particle, an elementary particle that had previously only existed in theoretical equations.

RELATED Study: Biodiversity declines can be reversed
RELATED Researchers use wastewater to grow algae for biofuels

World News // 12 hours ago
Nearly entire EU bloc calls for Israeli-Palestinian cease-fire
May 18 (UPI) -- The European Union on Tuesday called for an immediate cease-fire in the fighting between Israel and the Palestinian militant group Hamas, which has claimed more than 200 lives. 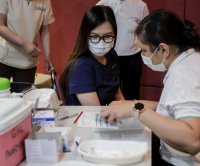 World News // 7 hours ago
LG strives to build general-purpose AI
SEOUL, May 18 (UPI) -- LG AI Research announced plans to spend more than $100 million over the next three years to create a general-purpose artificial neural network, which it calls "mega-scale" AI.