Purported Hitler watercolor up for auction in Los Angeles

A watercolor painting of flowers in a blue pitcher purported to be by Adolf Hitler goes to auction Thursday. Image courtesy of Nate D. Sanders auction house

LOS ANGELES, March 24 (UPI) -- A watercolor of flowers purported to be painted by Adolf Hitler is heading to auction in Los Angeles.

Prior to his political career, Hitler aspired to be an artist, and though many of his paintings were sold, the profession was never a successful one for him.

"The watercolor is considered unusual as the bulk of Hitler's work focused on landscapes and architecture," a news release from the auction house, Nate D. Sanders, said.

Information about the seller and provenance of the piece wasn't revealed.

The name "A. Hitler" is featured on the bottom right corner of the artwork, and a stamp of the name Samuel Morgenstern is on the back.

Morgenstern was a Jewish art dealer who bought and sold a number of Hitler's artworks. Though he was an early supporter of Hitler, Morgenstern was eventually sent to the Lodz Ghetto in German-occupied Poland, where he died.

Bidding for the auction, which is scheduled to take place Thursday, begins at $30,000.

World News // 44 minutes ago
Global Hawk drone flies near North Korea ahead of Korean War anniversary
July 26 (UPI) -- An unmanned U.S. reconnaissance aircraft flew over the Korean Peninsula ahead of North Korea's observance of "Victory Day," which marks the anniversary of the 1953 Korean Armistice Agreement. 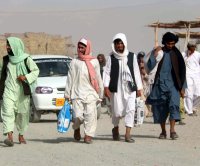