MEXICO CITY, March 24 (UPI) -- Ramiro Perez Moreno -- aka "El Rama" -- the commander of the Zetas drug cartel in the Mexican states of Tamaulipas, Coahuila and Nuevo Leon, was captured by Mexican marines early on Monday in Nuevo Laredo, Tamaulipas.

Perez, who is also referred to as Ramiro Pérez Ramos, was detained as he traveled in an SUV along with four men identified as Carlos Roberto Hernandez, Humberto Eleuterio Gutierrez Martinez, Luis Rolando Caudillo Garza and Daniel Israel Peña de la Rosa. The four men were also detained.

Authorities seized the men's vehicle, four assault rifles, one fragmentation grenade, chargers and cartridges -- all illicit in Mexico -- in addition to 200 envelopes with cocaine and two packages containing 6 kilos of marijuana.

Perez was among the 14 priority targets featured in the second phase of the federal government's Security Strategy Tamaulipas, which was launched in coordination with the state government in May 2013, according to Mexican newspaper Excelsior.

He is believed to have been preparing to be the Zetas' next leader.

The arrest comes on the heels of the apprehension of Omar Treviño Morales, who had been the head of the cartel since 2013, earlier this month. 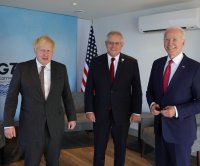 World News // 47 minutes ago
Britain signs 1st post-Brexit trade deal with Australia to cut out tariffs
June 15 (UPI) -- Britain on Tuesday brokered its first free trade deal since leaving the European Union 18 months ago by signing a what it called a historic new agreement with Australia.

World News // 1 hour ago
'America is back': European Union leaders welcome Biden at EU-U.S. Summit
June 15 (UPI) -- U.S. President Joe Biden met in Belgium with the top leaders of the European Union on Tuesday to begin two days of diplomacy that will culminate with his first in-person sit down with Russian President Vladimir Putin.