Voter turnout was about 71 percent, the highest since 1999. 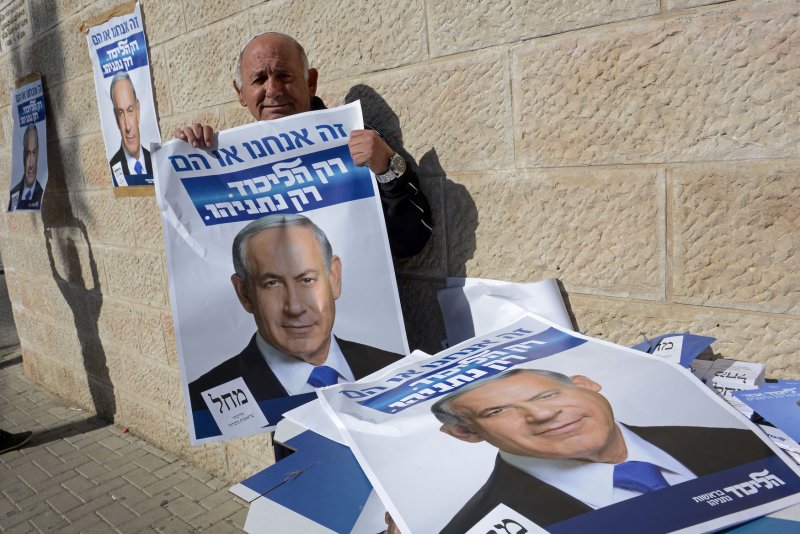 JERUSALEM, March 18 (UPI) -- Israeli Prime Minister Benjamin Netanyahu's Likud party won a conclusive victory, taking about 30 seats in Tuesday's election that was too close to call even when polls closed.

"Dear friends, against all odds we have achieved a great victory for Likud, for the national camp which is headed by Likud, for our people. I am proud of the Israeli people, who recognized what's important ... and stood up for real security, economy and social welfare, which we are committed to.

"This is not an easy morning for us and for those who believe in our way. We will lead the fight, together with our partners in Knesset, for the values believe in. We will fight on behalf of the citizens of Israel for social justice, diplomatic horizon, equality and democracy in hope that we can maintain a just, safe Jewish and democratic state. We thank from the bottom of our heart to all those who believe in us and in our way."

When polls closed for the Knesset election, Israel's unicameral legislative branch, Likud and the Zionist Union were tied at 27 seats. As more votes were being counted, Likud gained seats while the Zionist Union lost them.

There are 120 seats in the Knesset and since no party has ever won a majority of seats, including this year's election, party leaders must form alliances to form a government.

The parties that will join Netanyahu's majority government are still unannounced.

Voter turnout was the highest it's been in Israel since 1999 with about 71 percent of eligible voters casting ballots on Tuesday.

Netanyahu declared a "great victory" late Tuesday even as votes were being counted and the election was still too close to call.

World News // 3 hours ago
WNBA's Brittany Griner appears briefly in Russian court
June 27 (UPI) -- WNBA star Brittney Griner appeared briefly during a closed-door preliminary hearing with a new appearance set for July 1 but no other movement in her case since being initially detained on Feb. 17.

World News // 1 hour ago
Ancient Israeli mosaic returns home after years touring the world
June 27 (UPI) -- An ancient mosaic discovered in Israel more than 25 years ago, is now back in that country and went on display Monday after years spent touring prestigious museums around the world.

World News // 4 hours ago
Zelensky tells G7 leaders Ukraine needs help to end Russia war by year's end
June 27 (UPI) -- Ukrainian President Volodymyr Zelensky called on G7 leaders to make a major push to end Russia's invasion of Ukraine by the end of the year in a virtual address at the group's meeting on Monday.

World News // 5 hours ago
Russia forces build on their success in Severodonetsk in attacks on Lysychansk
June 27 (UPI) -- Luhansk region officials are urging citizens in Lysychansk to evacuate on Monday with the Russian military advancing on the last remaining city still under Ukrainian control in the region.

World News // 23 hours ago
India's COVID-19 cases highest in 4 months, but deaths stable
June 26 (UPI) -- COVID-19 cases in India are surging to the highest level in four months but the infections are a fraction at the peak of the pandemic in May 2021 when the Delta subvariant was dominant though deaths now remain low.
Advertisement