This week’s military exercise isn’t the first time Russia has shown off its military force in what Gen. John F. Kelly, commander of the U.S. Southern Command, said is a “challenge to U.S. influence in the Western Hemisphere.”

Russian President Vladimir Putin put the military on alert and deployed troops for training exercises one the one-year anniversary of the referendum to annex Crimea. UPI Photo/Stringer. | License Photo

MOSCOW, March 17 (UPI) -- Russian military aircraft were deployed Tuesday to conduct drills in Crimea, a move that could be seen as posturing on the one-year anniversary of a referendum to annex the territory to Russia.

"New military challenges and threats demand further boost of the military capabilities of armed forces and special attention is being paid to the condition of the newly-set-up strategic command in the north," Defense Minister Sergey Shoigu told journalists Monday.

"The constant military presence in the Arctic and the possibility to protect the state's interests by military means are regarded as an integral part of the general policy to guarantee national security," he said.

Nuclear-capable supersonic bombers were deployed to Crimea and tactical Iskander ballistic missiles were sent to the seaport city of Kaliningrad in the Russian enclave between Poland and Lithuania.

The military moves could be in response to ongoing NATO maritime exercises in the Black Sea.

"It is especially surprising that this is happening in north-eastern Europe, which is the most stable region not only on our continent, but also maybe in the whole world," he said. "Such NATO actions lead to destabilization of the situation and increasing tensions in northeastern Europe."

NATO, though, has argued Russia has stoked tension in the region by pushing a referendum to annex the Crimean Peninsula one year ago and by violating European airspace.

This week's military exercise isn't the first time Russia has shown off its military force in what Gen. John F. Kelly, commander of the U.S. Southern Command, said is a "challenge to U.S. influence in the Western Hemisphere."

"Last year and again this year, a Russian intelligence ship docked in Havana multiple times while conducting operations in the Gulf of Nicaragua to gain access to air bases and ports for resupply of Russian naval assets and strategic bombers operating in the Western Hemisphere," Kelly said in a statement before the Senate Armed Services Committee on Thursday.

He also cited instances in which the Russian military attempted to gain access to ports and air bases in Cuba, Venezuela and Nicaragua to resupply.

"While these actions do not pose an immediate threat, Russia's activities in the hemisphere are concerning and underscore the importance of remaining engaged with our partners," Kelly said.

"On this one year anniversary of the sham 'referendum' in Crimea, held in clear violation of Ukrainian law and the Ukrainian constitution, the United States reiterates its condemnation of a vote that was not voluntary, transparent, or democratic. We do not, nor will we, recognize Russia's attempted annexation and call on President Putin to end his country's occupation of Crimea," she said.

"A year ago, as covert Russian military forces took control of key government buildings and infrastructure, the population of Crimea was forced to go to the polls facing a false choice of either joining Russia or calling for Crimea's independence. Two days later, the Russian Federation attempted to annex sovereign Ukrainian territory, disrupting 70 years of international order and drawing the condemnation of free, democratic societies across the globe," Psaki said. 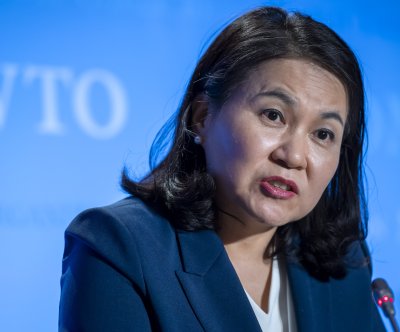