Ongoing airstrikes have been conducted on Islamic State targets by the U.S.-led coalition against the group. File Photo by Matthew Bruch/USAF/UPI | License Photo

TIKRIT, Iraq, March 2 (UPI) -- Iraq has launched a military offensive against the Islamic State to gain control of the strategic city of Tikrit, Saddam Hussein's hometown.

Iraqi security forces are attacking from different fronts in the large-scale offensive in the city about 90 miles north of Baghdad. Tikrit and Mosul, Iraq's second-largest city, fell into Islamic State capture last summer.

About 20,000 government troops and 4,500 militia members, mostly Shiite members but also some Sunni, are participating in the attack and the Iraqi military is nearing the heart of the city, according to BBC News.

Airstrikes are being conducted against the IS and many of its militants have retreated from areas surrounding Tikrit.

Iraqi Prime Minister Haider al-Abadi said it was the "last chance" for Sunni tribal fighters to abandon support of the Islamic State in Tikrit. Sunni insurgents began to support IS after months of protesting a Shiite-led government.

"I call upon those who have been misled or committed a mistake to lay down arms and join their people and security forces in order to liberate their cities," al-Abadi said Sunday during a news conference.

Reclaiming Tikrit is a strategic first step in retaking the Islamic State stronghold in northern Iraq -- Mosul, which was populated with more than a million people before it fell to IS capture.

U.S. military officials said the operation to retake Mosul could begin as early as April, depending on the degree of preparation by Iraqi security forces. 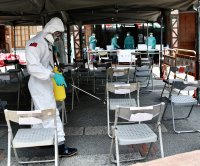