Addressing university students in St. Petersburg, he accused the Kiev government of refusing to attempt a peaceful settlement of the conflict in eastern Ukraine.

"We often say: Ukrainian army, Ukrainian army. But who is really fighting? There are official divisions of the armed forces but to a great extent there are so-called voluntary nationalist battalions. This is not even an army, it's a foreign legion. In this case it's a foreign NATO legion. (It fights) with the aim of geopolitically containing Russia, which is absolutely not in the national interests of the Ukrainian people. Unfortunately, the official Kiev authorities refuse to follow the path of peaceful regulation. They do not want to solve the crisis by political means. At first, they used law enforcement agencies, then the security service, then the army."

He also accused Ukraine of using cease-fires to slow the advance of separatists.

NATO Secretary General Jens Stoltenberg, in Brussels, dismissed Putin's claims, saying, "The statement that there is a NATO legion in Ukraine is nonsense. There is no NATO legion. The foreign forces in Ukraine are Russian."

A NATO statement, after an attack Saturday in Mariupol that killed 30 civilians, noted, "The attack was launched from territory controlled by separatists backed by Russia."

It added that Russia has supplied rebels, in recent weeks, with hundreds of armaments, including rocket systems, heavy artillery and tanks, and called on Russia to stop its attempts to destabilize Ukraine.

World News // 12 hours ago
Tornado touches down in German city, 43 injuries reported
May 21 (UPI) -- Police in Germany said 43 people were injured by a tornado that swept through a city amid a severe thunderstorm. 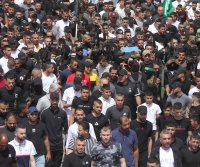 World News // 18 hours ago
Russia-Ukraine war: Attack on Severodonetsk kills at least 6
May 21 (UPI) -- Russian attacks in and around the city of Severodonetsk in Ukraine's Luhansk region have killed at least six civilians, a Ukrainian official confirmed Saturday.