Second round of lashes for Saudi blogger postponed again

Saudi Arabia for a second time postponed the flogging of blogger Raif Badawi, who was supposed to receive his second set of 50 lashes Friday. Photo courtesy of PEN International.

RIYADH, Saudi Arabia, Jan. 22 (UPI) -- Saudi Arabia for a second time postponed the flogging of blogger Raif Badawi, who was supposed to receive his second set of 50 lashes Friday.

Badawi was sentenced in May to 10 years in prison and 1,000 lashes. He was arrested in 2012 for cybercrime and insulting Islam through his website The Liberal Saudi Network.

He received the first 50 lashes on Jan. 9. The remaining 950 lashes were to be administered in increments of 50 each Friday. His flogging scheduled for Jan. 16 was postponed because he was medically unfit to receive more.

Badawi was taken to a prison clinic Friday, where a doctor determined he had not yet healed properly from his first round of lashes and couldn't withstand any more, Amnesty International said. The flogging was postponed until next week.

"Not only does this postponement on health grounds expose the utter brutality of this punishment, it underlines its outrageous inhumanity. The notion that Raif Badawi must be allowed to heal so that he can suffer this cruel punishment again and again is macabre and outrageous. Flogging should not be carried out under any circumstances," said Said Boumedouha, Amnesty International's deputy director for the Middle East and North Africa Program.

"Flogging is prohibited under international law along with other forms of corporal punishment. His flogging appears to have been postponed for now but there is no way of knowing whether Saudi Arabia's authorities will fully comply with the doctor's advice. Raif Badawi is still at immediate risk," Boumedouha said.

Amnesty International says Badawi is a prisoner of conscience and called for him to be unconditionally released immediately.

World News // 29 minutes ago
Six more killed in clash between rebels and Congo army
July 31 (UPI) -- Six people, including an army officer and civilian, were killed in clashes between the army and Ugandan rebels in the eastern part of the Democratic Republic of Congo on Saturday. 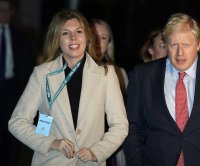 World News // 9 hours ago
South African rhino poaching increased 50% this year, still lower than before pandemic
July 31 (UPI) -- The was a 50% increase in the number of rhinoceroses killed in the first six months of 2021 in South Africa compared to the same period last year.