Villagers say they fled after seeing multinational forces retreating from a military base in the town of Baga as Boko Haram fighters stormed in.

BAGA, Nigeria, Jan. 4 (UPI) -- Boko Haram fighters put multinational forces into retreat from a military base in northeastern Nigeria on Saturday, allowing the group to seize the base and sending residents of a nearby town fleeing, witnesses said.

The base was located in the town of Baga in Borno state, northeastern Nigeria, and was home to several villagers and soldiers with the Multi-National Joint Task Force, including troops from Nigeria, Chad and Niger.

Boko Haram fighters stormed the base from all directions early Saturday, sending the multinational soldiers into a retreat, according to witnesses.

"They came through the north, the west and from the southern part of the town because the eastern part is only water. So, when we [went] towards the western part, we saw heavily armed Boko Haram men coming towards us," one resident told the BBC. "The soldiers were trying to repel the attack but that wasn't going to happen because a lot of the soldiers were without their guns and some were running into the town. When you see soldiers running away into the town -- what are you to do, other than to just run away as well?"

Maina Maaji Lawan, a senator from Borno state, confirmed that multinational forces had abandoned the base and that civilian resident were forced to flee into surrounding desert and forest while others sought refuge in neighboring Chad.

"There is definitely something wrong that makes our military abandon their posts each time there is an attack from Boko Haram," Lawan told the BBC.

Baga was the last town controlled by government forces in the Borno North area.

Casualties in the attack are unknown due to communications being cut off from the town. After Boko Haram militants took hostage 40 men and boys from a village in northeastern Nigeria on Dec. 31, news of that incident didn't get out for days due to destroyed phone towers. The news of Boko Haram slaughtering nearly 50 fishermen with knives and drowning in November wasn't discovered for several days due to the same problem.

Since 2009 Boko Haram has pursued a terror campaign in Nigeria in order to institute its version of Sharia law. The Islamic extremist group is responsible for over 5,000 deaths since then and is considered one of the world's deadliest terrorist organizations. 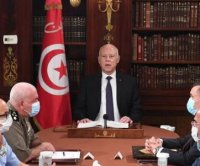