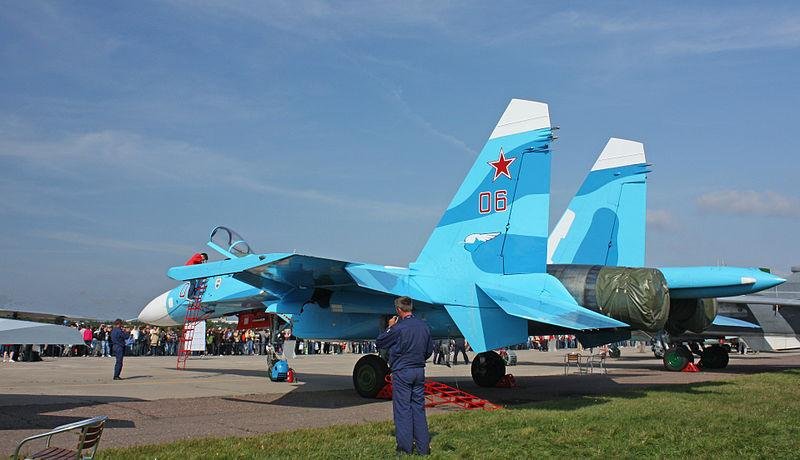 SEVASTOPOL, Ukraine, Nov. 26 (UPI) -- Russia's air force has moved some of its most sophisticated war planes to Belbek, near Crimea's capital of Sevastopol and the Ukrainian border.

It was reported earlier the air base would be significantly renovated for the planes and for other elements of a modernized air force expected at Belbek. The action could be seen as evidence of additional advanced armaments arriving near the border between Ukraine and Russia. Ground troops, as well as mechanized equipment such as tanks and armored personnel carriers, were observed entering Ukraine last month, and several days ago a Mikoyan Su-31, Russia's most advanced interceptor plane, was seen arriving at a base on Russian territory near the Ukraine border.

Prior to Russia's March annexation of Crimea, territory most countries still regard as belonging to Ukraine, the Belbek base housed much of the Ukrainian air force. Some of those planes were returned, dismantled, to the Ukrainian air force, which has a large number of planes but is limited by underfunding and limited training.

World News // 3 hours ago
Poland seeks restitution of 'stolen' Kandinsky painting sold at German auction for $400K
Dec. 3 (UPI) -- Poland's Ministry of Culture and Natural Heritage said it will take legal action and seek restitution after a Wassily Kandinsky painting allegedly stolen from the National Museum in Warsaw was sold at a German auction.

World News // 11 hours ago
French rail strike causes widespread weekend train cancelations
Dec. 3 (UPI) -- France's state state-owned railway company says it has canceled more than half of its scheduled trips this weekend due to a nationwide strike by rail conductors.

World News // 12 hours ago
Ukrainian police foil attempt to steal Banksy mural
Dec. 3 (UPI) -- Eight people who attempted to steal a mural by graffiti artist Banksy off the wall of a war-torn building in the Ukrainian city of Hostomel have been arrested, officials said Saturday.

World News // 14 hours ago
South African president Ramaphosa to run again despite corruption report
Dec. 3 (UPI) -- After previously signaling he would resign, South African President Cyril Ramaphosa confirmed on Saturday that he will not leave office and instead run for a second presidential term.