Islamic State expansion is made possible when often little-known or relatively new jihadist groups announce their allegiance to IS, as was the case in the Libyan city of Derna.

The Libyan coastal city of Derna, shown here with the alternate spelling of Darnah, has been taken over by the Islamic State. UPI/CIA

TRIPOLI, Libya, Nov. 19 (UPI) -- The Islamic State has seized control of the coastal city of Derna on Libya's Mediterranean coast.

According to CNN, IS is in complete control of the city, located about 200 miles from the European coast. The Derna branch is composed of 800 fighters who operate six or so camps outside of town, with larger training facilities located in the Green Mountains.

Abu Bakr al-Baghdadi, the self-proclaimed leader of IS, said in an audio recording posted online last week, "We give you good news by announcing the expansion of the Islamic State to new lands ... the lands of Al Haramayn [Saudi Arabia], Yemen, Egypt, Libya and Algeria."

Such expansion is made possible when often little known or relatively new jihadist groups announce their allegiance to IS, as was the case in Derna.

Majlis Shura Shabab al-Islam (the Islamic Youth Shura Council), founded in April, proclaimed allegiance to IS and announced in early October that territory it had seized in Derna was part of the IS "caliphate."

What's happening in Derna "could be a model for future acquisition of territory by the Islamic State beyond its base in Iraq and Syria," Aaron Y. Zelin, a fellow with The Washington Institute, wrote in a piece titled "The Islamic State's First Colony in Libya," published by the Washington, D.C.-based think tank in October.

Zelin noted that such a model for IS expansion differed from al-Qaida's practice of establishing "autonomous local franchise organizations" and acknowledged that oversight could be complicated. "Questions remain about the command-and-control capabilities that would be needed to realize such a scenario, as well as the logistics inherent in marshaling widespread foreign fighters and facilitation networks."

World News // 2 hours ago
Distress beacon from islands near Tonga eruption site detected
Jan. 17 (UPI) -- A distress signal emanating from a pair of isolated, low-lying islands near Tonga has been detected in the wake of this weekend's undersea volcano eruption, United Nations officials said Monday. World News // 9 hours ago
China decides not to sell tickets to public for Winter Olympics in Beijing
Jan. 17 (UPI) -- The Beijing Winter Olympics Organizing Committee announced Monday that tickets will not be sold to the public but will be distributed "exclusively" to residents of the country who meet strict COVID-19 requirements. 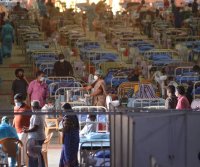