Schools and businesses closed, as did a stretch of the New York State Thruway.

BUFFALO, N.Y., Nov. 18 (UPI) -- The National Guard was deployed Tuesday afternoon to help dig areas of Buffalo out of snow that could top 70 inches by the end of the day.

The southern suburbs of the city received up to three feet of snow overnight as cold weather struck the northeastern and Great Lakes regions of the United States.

Buffalo's most severe winter weather is typically the result of "lake effect" storms in which cold air travels eastward over the warm lake, but the current storm system has essentially parked itself in western New York and is expected to stay until at least Thursday.

Buffalo's northern suburbs received little snow, but the 15- to 20-mile band of snow is expected to remain stationary Tuesday and move northward by Wednesday.

Forecasters are predicting snowfall totals could reach 70 to 75 inches by the end of Tuesday this fresh wave of snow hits the city.

"It think it's going to take many days to dig out the Southtowns," said Jon Hitchcock, a meteorologist with the National Weather Service in Buffalo.

Schools and businesses closed Tuesday throughout the area, and plane flights were cancelled, but the downtown area thus far has seen little snow. The nearby southern suburbs of Hamburg, West Seneca and Orchard Park, where the Buffalo Bills will play a football game Sunday, are under two to three feet of snow, the National Weather Service said. Those towns received up to four inches of snow per hour Monday night.

The New York State Thruway, Interstate 90, was closed at 4 a.m. Tuesday from Exit 59, near the New York-Pennsylvania border, to Exit 46 in the suburbs of Rochester, a stretch of about 130 miles, due to white-out conditions.

Meanwhile, the entire country is bracing for record low temperatures as this second blast of Arctic air pushes south.

The Upper Midwest and Great Lakes region is expected to see highs in the teens and 20s Tuesday into Wednesday for what could be the longest period of sub-freezing temperatures the region has seen in the month of November.

In parts of the southeast, highs will be in the 30s and 40s and the Appalachians and northern plans will see highs in the single digits on Wednesday. Even places as far south as Florida are forecast to have below freezing temperatures.

Danielle Haynes contributed to this report.

World News // 1 hour ago
WHO: Omicron variant poised to spread quickly around world
Nov. 29 (UPI) -- The World Health Organization has warned that the Omicron variant of the COVID-19 virus could lead to "severe consequences" in some parts of the world because of its ability to change and dodge efforts to block it.

World News // 4 hours ago
WHO criticizes nations over Africa travel bans
Nov. 29 (UPI) -- The World Health Organization is calling on world leaders to follow the science in doing so, warning that such measures could put "a heavy burden" on lives and livelihoods.

World News // 19 hours ago
Israel bans all travel from foreigners as world COVID Omicron cases grow
Nov. 28 (UPI) -- The world is bracing for the effects of a worrisome new COVID-19 variant, called Omicron, with banning travel from South Africa, where is was first detected, including Israel banning all foreign visitors. 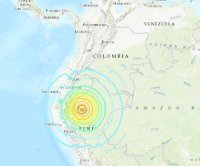