The FARC has not yet commented on the abduction or the president's decision to suspend the peace talks. 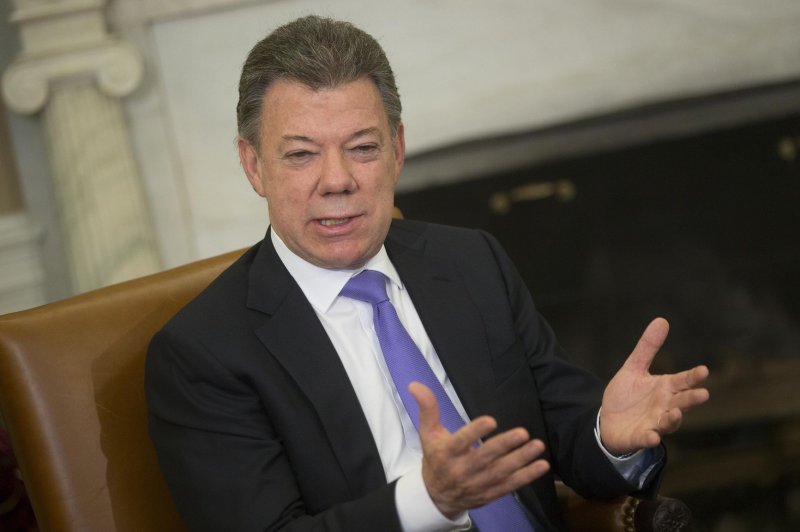 Gen. Ruben Dario Alzate, along with Army Cpl. Jorge Rodriguez Contreras and civilian lawyer Gloria Urrego, was kidnapped Sunday afternoon by armed men in the village of Las Mercedes near the provincial capital of Quibdo.

"This kidnapping is completely unacceptable... The FARC is responsible for the life and the security of these three people," the president said.

Santos also directed his defense minister to explain why the general seemingly breached security protocols when he traveled to the known FARC area as a civilian and without his bodyguards.

The conflict between the government and the FARC began in the 1960s and is considered Latin America's longest running conflict. An estimated 220,000 people have been killed and three million internally displaced by the fighting.

During his inauguration in August, the now two-term president spoke about his determination to end Colombia's decades of conflict and negotiate a peace with the FARC. Peace talks began in Nov. 2012 and have been suspended once before, in August 2013.

The FARC has not yet commented on the abduction or the president's decision to suspend the peace talks.

World News // 1 hour ago
U.N. official says rape, sexual violence rising in Ethiopia's Tigray conflict
Jan. 22 (UPI) -- A top United Nations official is demanding an end to sexual violence in the Tigray region of Ethiopia that has resulted from fighting between government forces and local factions.

World News // 2 hours ago
Japan, IOC reject report that officials expect to cancel Tokyo Olympics
Jan. 22 (UPI) -- Japan and the International Olympic Committee on Friday both denied a news report that claims officials expect they will have to cancel the upcoming Summer Games in Tokyo due to ongoing threats related to COVID-19.

World News // 7 hours ago
Google threatens to remove search from Australia over new law
Jan. 22 (UPI) -- Google threatened to disable its search engine in Australia if the government passes new regulations that would force large tech companies to negotiate with news organizations to present the content they produce.