Kurdish forces in Iraq reclaim part of Mosul Dam from IS

Volunteers from Kurdish Peshmerga fighters take up their position as they fight with Kurdish forces against the militants from the Islamic State, near Khazer town near Mosul city, northern Iraq, August 10, 2014. The U.S. military said it had attacked Islamic State targets throughout Sunday, successfully conducting multiple airstrikes using fighter planes and drones to defend Kurdish forces near Erbil. UPI/Mohammed al Jumaily | License Photo

Kurdish officials said they were making progress in reclaiming the critical structure from Islamic State militants, though face "fierce resistance."

The Mosul dam is located on the Tigris River 30 miles northwest of Mosul, Iraq's second largest city, which has been under IS control since its capture on June 10. The dam was captured Aug. 7.

The United States began an air assault on the IS fighters at the dam Saturday to prevent them from their push toward Kurdish territory and the city of Erbil, which has a U.S. consulate.

Peshmerga spokesman Halgord Hikmat told CNN clashes between Kurdish and IS fighters on the western side of the dam were ongoing. 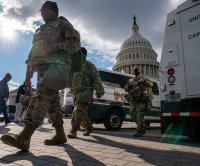 World News // 19 hours ago
Suga tries to reassure Japan as approval rating falls
Jan. 18 (UPI) -- Under mounting criticism, Japanese Prime Minister Yoshihide Suga asked the legislature for patience Monday as he guided the country through the coronavirus pandemic in the middle of a struggling economy.