Officials fear a widespread infection of Ebola virus after several patients quarantined for the disease flee a clinic that was attacked.

The assailants stole items, like bedding, that could also carry the disease. Collins said the attackers weren't trying to free the quarantined patients.

"It was an attack from people afraid of Ebola," he said. "Everybody is afraid."

As of Friday, the World Health Organizations suspects some 2,127 people in Guinea, Liberia, Nigeria and Sierra Leone have contracted the virus. There are 1,145 suspected and 712 confirmed deaths of the disease.

In Liberia, there are 786 suspected cases and 413 suspected deaths. There are 154 confirmed deaths.

No vaccine or cure currently exists for the flu-like virus, which causes fever with chills, joint pain, muscle pain and chest pain.

Since it was first discovered in 1976, the disease has infected fewer than 2,000 people, mostly in the tropical regions of Sub-Saharan Africa. It resides in infected pigs, monkeys and fruit bats, and can be transferred to humans.

In some cases there is up to a 90 percent mortality rate. The mortality rate of the current outbreak is a bit more than 50 percent. 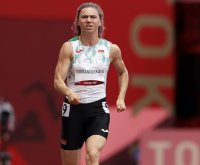