The next time representatives from the Syrian opposition and the Syrian government meet face-to-face for continued peace talks, they will have a new mediator. United Nations Secretary-General Ban Ki-moon announced Thursday the appointment of Staffan de Mistura as Special Envoy of the Secretary-General for Syria. 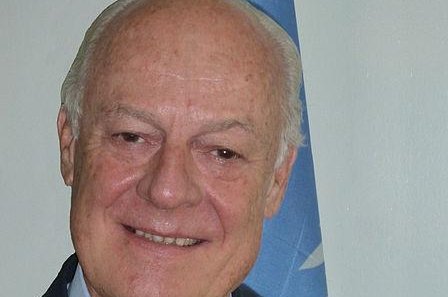 Mistura served previously as a U.N. envoy for the conflicts in Afghanistan and Iraq.

The secretary-general noted that he consulted with the Syrian Authorities regarding Mistura's appointment.

"The Special Envoy will provide good offices aimed at bringing an end to all violence and human rights violations, and promoting a peaceful solution to the Syrian crisis.

"The Special Envoy will be guided in this endeavour by relevant resolutions of the General Assembly and the Security Council, and the United Nations protection agenda. He will consult broadly and engage with all relevant interlocutors within and outside Syria, in order to end the violence and facilitate a peaceful Syrian-led and inclusive political solution that meets the democratic aspirations of the Syrian people.

"I call on the international community, including in particular the Security Council and the Syrian parties, to give Mr. de Mistura unified support in order to allow him to succeed in his mission."