Gen. Fang Fenghui, while visiting Washington, warned the United States its interest in Asia were part of the reason for ongoing hostilities.

A crew member on a Chinese trawler uses a grapple hook in an apparent attempt to snag a nearby vessel in 2009. (UPI Photo/U.S. Navy) | License Photo

WASHINGTON, May 16 (UPI) -- China announced Friday it would continue drilling for oil in the disputed South China Sea, despite anti-Chinese rioting in Vietnam.

Chinese People's Liberation Army Chief of General Staff Gen. Fang Fenghui, visiting Washington, said China could not "afford to lose an inch" of territory in the sea, contested by China, Malaysia, the Philippines and Vietnam. He also blamed Hanoi for inciting violence and warned the United States that its efforts to focus on Asia were fueling hostilities.

Fang added that some Asian nations are using President Barack Obama's recent visit and re-commitment to Asia as an opportunity to foment trouble.

U.S. Vice President Joe Biden responded to Fang's comments in a statement: "No nation should take provocative steps to advance claims over disputed areas in a manner that undermines peace and stability in the region."

Nationalist sentiment in Vietnam, over China's decision to move an oil rig into water west of the disputed parcel Islands in the South China Sea, reached a boiling point Thursday, as at least 15 foreign-owned manufacturing facilities were set afire in Binh Duong province. A Chinese worker died in an attack on a Taiwanese-owned steel mill Wednesday, and 150 people were injured as protesters attacked a Taiwanese-owned mill. Protesters appear to target any factory with Chinese characters on their signage, whether owned by mainland Chinese companies or Taiwanese business interests.

It was reported that many Chinese workers have left their jobs to cross into neighboring Cambodia.

China has made the controversial move of claiming a U-shaped section of the South China Sea, including some areas claimed by other countries.

World News // 12 hours ago
WHO chief urges wealthy nations to pause COVID-19 vaccine boosters
Aug. 4 (UPI) -- The head of the WHO on Wednesday called on wealthier countries to stop allowing people who are fully vaccinated to receive booster COVID-19 shots and instead send those doses to poorer nations. 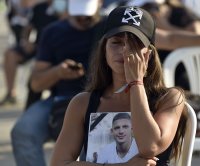 World News // 8 hours ago
Beirut traumatized by port blast, lack of justice a year later
BEIRUT, Lebanon, Aug. 4 (UPI) -- A year after an explosion at the Port of Beirut devastated much of the city, survivors and families of victims remain traumatized -- as much by a lack of accountability as their visceral memories of the violence.

World News // 13 hours ago
At least 8 dead from Taliban car bomb that targeted Afghan defense minister
Aug. 4 (UPI) -- At least eight people have been killed in new fighting in Afghanistan that's been stirred by a resurgent Taliban motivated by the withdrawal of U.S. forces, officials said Wednesday. 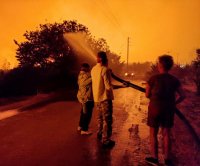 World News // 15 hours ago
Fearful of returning home, Belarus Olympic sprinter leaves Tokyo for Austria
Aug. 4 (UPI) -- Belarusian sprinter Krystsina Tsimanouskaya left Tokyo on Wednesday for Poland, by way of Austria, after days of trying to secure asylum out of fear that she'd be in danger if she returns to her home country.
Advertisement