The clashes were part of a massive campaign by the Ukrainian government to regain control of the eastern region after pro-Russian activists seized dozens of government buildings.

SLOVYANSK, Ukraine, May 6 (UPI) -- Thirty pro-Russian militants and four Ukrainian soldiers were killed Monday night as the Ukrainian government attempts to regain control of the region.

Since the clashes Monday, it is reported that the militants have quietly retreated to the city center, where there has since been a lull in fighting between the Ukrainian troops and approximately 800 pro-Russian insurgents.

The clashes were part of a massive campaign by the Ukrainian government to regain control of the eastern region after pro-Russian activists seized dozens of government buildings. Ukrainian Prime Minister Arseniy Yatsenyuk traveled to Odessa Sunday after dozens were killed in the southern port city Friday.

Yatsenyuk accused Russia of inciting the violence as part of a plan to "destroy Ukraine and its statehood."

Russia has been accused several times of sending in agents to stir unrest in the region and supplying weapons to the pro-Russian militants. Russia has denied all such accusations.

Ukraine claims they have control of the region but freelance journalist Maxim Eristavi told the Huffington Post that the increase in street violence is a result of total lack of control by local authorities.

World News // 22 minutes ago
Mass killer Anders Breivik gives Nazi salute at parole hearing in Norway
Jan. 18 (UPI) -- Anders Breivik, a far-right White supremacist who killed dozens of people in Norway a decade ago, appeared at a parole hearing on Tuesday and reaffirmed his loyalty to the neo-Nazi movement. 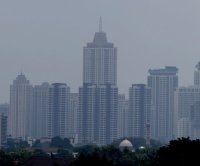 World News // 20 hours ago
Saudi-led coalition launches airstrikes on Yemen after deadly Dhabi airport attack
Jan. 17 (UPI) -- The Saudi-led coalition said late Monday it retaliated against the Houthi militia in Yemen after the rebels claimed responsibility for a rare drone attack that caused three oil tankers to explode in the UAE.
Advertisement