In this photo released by Syria's national news agency, Syrian President Bashar al-Assad talks with people during his visit to Ein al-Tinah village, northeast of Damascus, in Syria on April 20, 2014. (UPI) | License Photo

NEW YORK, April 22 (UPI) -- In response to an announcement by the Syrian government that presidential elections will be held June 3, the United Nations urged Damascus to reconsider.

UN spokesperson Stephane Dujarric warned that holding elections in the midst of the civil war would violate the agreed-upon Geneva Communique, which stipulates the establishment of a transitional body by mutual consent with full executive authorities prior to holding national elections.

"The holding of elections in the current circumstances amidst the ongoing conflict and massive displacement will damage the political process and hamper the prospects for political solution that the country so urgently need. Such elections are incompatible with the letter and spirit of the Geneva Communiqué. We will nonetheless continue to search and build upon any opening for a solution to the tragedy in Syria."

The Syrian government's announcement regarding elections comes as the Syrian civil war continues to rage into its third year, with more than 100,000 dead from the bloody conflict.

World News // 5 minutes ago
COVID-19 cases hit 3-month high in S. Korea amid growing outbreak
SEOUL, April 14 (UPI) -- South Korea reported 731 new cases of COVID-19 Wednesday, the highest total in over three months, as officials warned of a looming fourth wave of the virus and cautioned that stricter distancing measures may be in store.

World News // 15 hours ago
Iran to increase uranium enrichment amid U.S. talks to return to nuclear deal
April 13 (UPI) -- The Iranian government told an international nuclear watchdog on Tuesday that it plans to increase enrichment of uranium, further violating terms of the 2015 nuclear deal that the U.S. is in the process of rejoining. 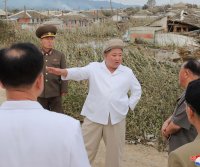