JALALABAD, Afghanistan, March 20 (UPI) -- The Taliban in Afghanistan claimed responsibility for an attack Thursday on a Jalalabad police station and for gunfire at an exclusive Kabul hotel.

Officials said at least 18 people were killed in Jalalabad, RAWA News reported. The details outbreak of violence at the Serena Hotel, which occurred Thursday evening, were murkier, the New York Times said.

In a text message sent to media, Taliban leaders said fighters killed at least 10 police officers in what was called a "multi-pronged" attack, RAWA News reported.

Police said officers shot and killed seven attackers, who were all wearing suicide vests. A civilian also was killed.

Witnesses told the BBC that state-run Radio Television Afghanistan was one of several buildings still burning hours after the attack.

"I woke up and my windows were broken," Habib said. "Then there were gun shots and explosions throughout the morning. Now almost half of the city remains closed."

A Taliban spokesman said suicide bombers were able to enter the Serena, an expensive hotel near the presidential palace, Khaama Press reported. But officials said four gunmen attacked and were killed by police.

Some reports said the violence was the result of a dispute between two groups of guests, all of them armed, the Times said.

Taliban leaders have threatened a campaign of violence in the run-up to Afghanistan's national elections April 5.

World News // 12 hours ago
EU regulator recommends Paxlovid COVID-19 pill for at-risk adults
Jan. 27 (UPI) -- The European Medicines Agency on Thursday recommended Pfizer's Paxlovid antiviral COVID-19 pill for treatment in adults who do not require supplemental oxygen and who are at increased risk of severe disease.

World News // 22 hours ago
Greenpeace fears 100,000 'ghost flights' in Europe this winter will cause major climate damage
Jan. 27 (UPI) -- Environmental advocates are expressing concern about a tactic that some airlines are taking this winter in order to keep their airport permits -- "ghost flights," which are flights that carry few or no passengers. 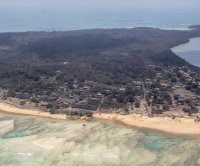