New rules for climbing Mount Everest include cleaning up trash

The rules follow concern over the amount of rubbish on and around the world's tallest mountain, and will be enforced when the climbing season begins in April, the British Broadcasting Corp. reported Tuesday.

The rules will be applied to anyone who climbs above the base camp, located at the 17,388 feet mark of the 29,029 foot mountain, an official said.

Security officials will be stationed at the base of the mountain because of a brawl that occurred in April 2013, CNN reported.

Mountaineers Ueli Steck and Simone Moro were ascending Everest by a new route when they were allegedly confronted by Sherpa guides laying ropes for other climbers who accused the pair of getting in their way.

Steck and Moro claim the Sherpas threatened them and threw rocks at them. The issue was resolved through the mediation of a Nepalese army officer leading an expedition, CNN said. 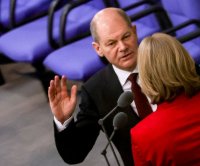 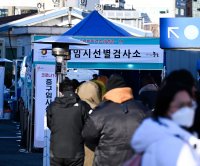 World News // 1 day ago
UAE becomes one of few Middle East nations to change work week to Monday-Friday
Dec. 7 (UPI) -- The United Arab Emirates on Tuesday formally announced that it's shifting its official work week from Sunday to Thursday to Monday to Friday, becoming one of the few Middle Eastern nations to do so.
Advertisement