KABUL, Afghanistan, Feb. 23 (UPI) -- The Taliban say they have decided to postpone prisoner exchange talks with the United States for the release of U.S. Army Sgt. Bowe Bergdahl, held by the group.

Rhe Army infantryman, the only U.S. soldier held hostage in Afghanistan, was abducted in 2009 outside his base in eastern Afghanistan's Paktika province and the Taliban later claimed responsibility for his capture.

"Given the complexity of the political situation in the country, the leadership council of the Emirate (Taliban's name for Afghanistan) has decided to postpone this matter for some time. Therefore, the process of exchange of prisoners is delayed until further order," the Washington Post reported, quoting a Taliban statement emailed to journalists Sunday.

The issue relates to likely talks for the release of five Taliban prisoners from the Guantanamo Bay, Cuba, prison facility, in exchange for release of Bergdahl.

The Post quoted the Taliban as saying "progress was made through the mediation to some extent" but gave no other details.

U.S. officials have not announced any "active" negotiations with the Taliban, nor any progress in that direction.

The New York Times said the latest Taliban statement may relate to the current campaign for Afghanistan's presidential elections in April, or Afghan President Hamid Karzai's refusal to sign a security deal needed to plan a residual U.S. troop presence in that country after the withdrawal of the international forces by the end of this year. 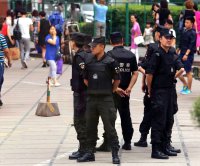 World News // 12 hours ago
Populist governor in South Korea seen leading in presidential poll
April 22 (UPI) -- A politician once dubbed the Bernie Sanders of South Korea is holding a slight lead in a new poll ahead of the country's presidential election in 2022.

World News // 12 hours ago
Lebanon offers a path to save maritime border talks with Israel
BEIRUT, Lebanon, April 22 (UPI) -- Lebanon is seeking a quick resumption of U.S.-mediated negotiations over its maritime border dispute with Israel, putting on hold new claims to more offshore territory and inviting international experts to step in.