He was referring to a U.S. proposal that would permit Israeli soldiers to maintain a presence in the Jordan Valley, the eastern border of a future Palestinian state, for some 10 to 15 years. Retired U.S. Marine Corps Gen. John Allen raised the proposal as part of a plan to enhance Israel's security after a Palestinian state is established.

El-Araby said the Palestinians should not offer concessions to the Israelis, adding there are no guarantees that the Palestinian-Israeli peace negotiations will have a successful outcome, the Kuwaiti news agency KUNA reported. The proposals offered by the U.S. team are unacceptable, he said, noting the Palestinians will not agree to one Israeli soldier's presence on Palestinian soil.

The security plan proposed by U.S. Secretary of State John Kerry favors Israel and requires a prolonged Israeli presence in the Jordan Valley while delaying Palestinian demands to a later stage, Abbas said at the meeting, Haaretz reported. 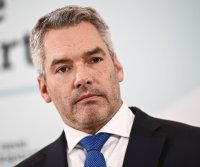 World News // 23 hours ago
Interior minister set to become Austria's sixth chancellor in 5 years
Dec. 3 (UPI) -- Interior minister Karl Nehammer said he's been nominated to take over as leader of the conservative People's Party, putting him in line to become the country's next chancellor.