Syrian military officials said more than 80 civilians in Adra were executed by Islamic rebels and other civilians were kidnapped for use as human shields, RT reported Monday.

Meanwhile, military sources told RT, a Russian English-language news channel, the "armed groups have performed an execution of civilians" in Adra in areas taken back by Syrian forces.

Russia has supported Assad's regime and opposed an international military intervention since the start of Syria's civil war in March 2011.

"The situation was terrible -- with killing, atrocities, and fear as the background. Unidentified armed men came into town, but it was obvious that they were Jabhat al-Nusra militants," Muhammad Al-Said told the Russian news channel. "The worst crime they committed was that they toasted people in ovens used to bake bread when those people came to buy it. They kidnapped and beat up many."

The United Nations has estimated more than 100,000 people have died and hundreds of thousands of people have been injured since the Syrian civil war began as peaceful anti-government protests in March 2011.

More than 2.3 million people have fled Syria, and another 4.25 million Syrians have been displaced within their country since the civil war began, an Amnesty International report released Friday indicated. 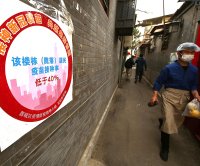