GENEVA, Switzerland, Nov. 24 (UPI) -- Iran will halt key portions of its nuclear program in return for the easing of economic sanctions under an interim deal reached early Sunday, diplomats said.

In a statement released by the White House, Obama said the deal worked out between Iran and the P5+1 nations -- the United States, Britain, Germany, France, Russia and China -- in concert with the European Union, "an important first step toward a comprehensive solution that addresses our concerns with the Islamic Republic of Iran's nuclear program."

He called the agreement "a new path" that will allow for verification that Iran's nuclear program is peaceful and not intended for military use.

RELATED Kerry to travel to Switzerland for Iran nuke talks

"While today's announcement is just a first step, it achieves a great deal," the U.S. president said. "For the first time in nearly a decade, we have halted the progress of the Iranian nuclear program, and key parts of the program will be rolled back."

Obama listed the terms to which Iran has agreed: halting certain levels of enrichment; neutralizing part of its stockpile; a ban on its next-generation centrifuges and the installation or start-up new ones; halting work at its plutonium reactor; allowing new inspections of its nuclear facilities; and verification by the international community that it is keeping its commitments.

"These are substantial limitations which will help prevent Iran from building a nuclear weapon," Obama said. "Simply put, they cut off Iran's most likely paths to a bomb.

"Meanwhile, this first step will create time and space over the next six months for more negotiations to fully address our comprehensive concerns about the Iranian program.

"On our side, the United States and our friends and allies have agreed to provide Iran modest relief, while continuing to apply our toughest sanctions. We will refrain from imposing new sanctions, and we will allow the Iranian government access to a portion of the revenue that they have been denied through sanctions.

"But the broader architecture of sanctions will remain in place and we will continue to enforce them vigorously. And if Iran does not fully meet its commitments during this six month phase, we will turn off the relief, and ratchet up the pressure."

The next six months will be used to negotiate a comprehensive agreement.

"As we go forward, the resolve of the United States will remain firm, as will our commitment to our friends and allies -- particularly Israel and our [Persian] Gulf partners, who have good reason to be skeptical about Iran's intentions," he said.

The Washington Post reported the agreement reached in Geneva, Switzerland, was signed at a 3 a.m. ceremony in the Palace of Nations.

A top Iranian negotiator had said Saturday the talks were difficult.

In a Twitter message, Abbas Araqchi, a leading Iranian diplomat at the negotiations, said "the fourth day of negotiations is hard and breathtaking," The New York Times reported.

RELATED Report: Proposal to Iran to include daily reactor checks

"The foreign ministers have arrived and I hope that they will be ready for taking hard decisions," he said.

The talks, which had been scheduled to end Friday, were extended after hopes of a weekend breakthrough lured top diplomats from the nations involved.

Araqchi had been quoted by Iranian reporters as saying the Iranian delegation was prepared to continue negotiations into Monday, the Financial Times reported.

He said "it's very important that any agreement is thorough, detailed and it's an agreement in which the whole world can have confidence."

European Union foreign policy chief Catherine Ashton is leading the talks, which are being attended by the so-called P5+1 group of nations that also includes the United States, Russia, France, China and Germany.

U.S. Secretary of State John Kerry also arrived in Geneva, saying he wanted to help "narrow the differences" blocking an agreement at the talks.

Jennifer Psaki, a spokeswoman for the State Department, said, "We're closer than we have ever been in a decade to achieving a diplomatic agreement for a first step with the Iranians," Voice of America reported.

That first step, she said, would create time to reach a broader agreement on limiting Iran's nuclear program.

After arriving in Geneva, Kerry met separately with Ashton and the foreign ministers of France and Russia.

The talks were aimed at convincing Iran to end its nuclear enrichment program. In exchange, sanctions against the country will be loosened.

Iran insists it must have enriched uranium to operate reactors that generate the nation's electricity.

World News // 13 hours ago
Coronavirus: Cruise ship evacuations begin; death toll rises to 1,670
Feb. 16 (UPI) -- The death toll from the coronavirus rose to 1,670 Sunday as evacuations began overnight from a cruise ship that had been quarantined in Japan with 356 confirmed cases of the infection. 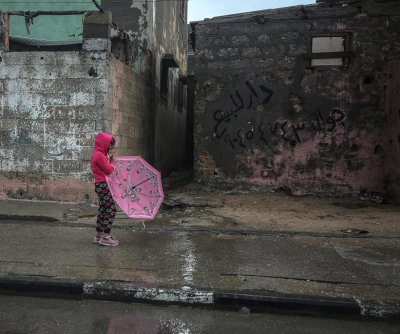