Karzai has said he doesn't trust the United States but that a security pact could bring stability.

Pakistani trucks carrying NATO and U.S military vehicles cross the Quetta Chaman highway at Kojak Pass border area after leaving the southern Afghanistan province of Kandahar near Chaman, Pakistan on July 25, 2013. The trucks head to the port of Karachi, Pakistan as the pullout continues, ending a NATO/USA decade-long military combat involvement in Afghanistan by the end of 2014. There are approximately 60,000 American troops in Afghanistan at present. UPI/Matiullah Achakzai | License Photo

(UPI) -- Afghan President Hamid Karzai gave his support to a proposal that would see 15,000 foreign troops stay in Afghanistan past 2014 on Thursday. Karzai said he felt it was a chance to bring stability to Afghanistan.

Now, 2,500 delegates made up of Afghan elders must approve of the deal agreed upon by the U.S. and Karzai.

Should the troops stay, Karzai maintained that not all would be American. Other NATO countries and some "Muslim nations" would also be involved, he said.

A similar deal between Iraq and the U.S. failed in 2011 when Iraq said U.S. soldiers would be held accountable to local courts.

World News // 7 hours ago
German police thwart potential Yom Kippur attack on synagogue
Sept. 17 (UPI) -- Authorities in Germany said they have foiled a potential attack on a synagogue in the western city of Hagen.

World News // 13 hours ago
Thousands of Haitian migrants gather at border bridge between Texas, Mexico
Sept. 16 (UPI) -- Thousands of asylum-seeking migrants -- most of them from Haiti -- are waiting under an international bridge in Del Rio to be processed to enter the country. 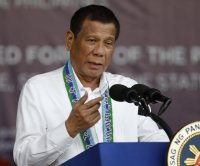