U.S. hopes for positive outcome of security deal with Afghanistan

Pakistani security forces pat down travelers crossing the Afghanistan border at Chaman, Pakistani on September 2, 2013. Security remains tight in the border regions of the two countries as U.S. and coalition forces continue to withdraw from Afghanistan. The present 70,000 U.S. Troops will be cut to 34,000 by February 2014, but the NATO commander Lt. Gen. Mark Milley said on September 4, 2013, that there has been no discussions that the coalition would completely withdraw by the end of 2014. UPI/Matiullah | License Photo

KABUL, Afghanistan, Nov. 19 (UPI) -- The United States hopes for a positive outcome from the Loya Jirga meeting in Afghanistan on the proposed bilateral security agreement, an official said.

The Loya Jirga meeting of about 3,000 tribal elders is set for Thursday in Kabul and its outcome would determine what kind of security deal Afghanistan and the United States would have once the coalition forces leave the country by the end of 2014, how many U.S. troops would stay back and what would be their role.

If the tribal elders do not accept the deal, the United States may bring home all of its troops.

Speaking to reporters in Washington, U.S. State Department spokeswoman Jen Psaki said a general agreement on the bilateral security pact was reached when U.S. Secretary of State John Kerry was in Kabul just last month. The tribal elders must give their nod before any final agreement emerges.

"We, of course, respect the Afghan process and continue to work for a positive outcome," she said. "We believe that would be to the benefit of both countries. So that's the message we're conveying on the ground, and we'll respect the process moving forward."

One major unresolved issue which may scuttle any deal relates to whether U.S. troops will be able to enter Afghan homes in search of possible insurgents. Afghan President Hamid Karzai has opposed any such searches.

The United States also has insisted the Pentagon's condition that only the United States will have legal jurisdiction over its troops in Afghanistan and not the local courts.

Earlier, the BBC quoted a Karzai spokesman as saying there was no flexibility possible in the stand taken by his government over U.S. forces entering Afghan homes and mosques for "the purpose of aggression."

The BBC report said Karzai appeared to have secured U.S. agreement not to stage attacks on Afghan soil without first consulting the Afghan authorities.

The stakes are high for Afghanistan too .

If the United States decides to pull out all its forces in the absence of a BSA, it could impact millions of dollars of foreign donations and aid, which the Karzai government badly needs for the country's development.

World News // 2 minutes ago
At least 1 dead, 5 injured in Uganda bomb blast
Oct. 24 (UPI) -- At least one person was killed and five others were injured in a bomb blast Saturday which President Yoweri Museveni said may have been an act of terrorism. 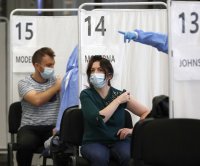 World News // 21 hours ago
Somali government says it has ousted Islamist militia from town
Oct. 23 (UPI) -- A regional government in Somalia says it's in control of a town in the central part of the country after a clash with an Islamist militia.

World News // 22 hours ago
Pakistani police clash with banned Islamist group seeking release of its leader
Oct. 23 (UPI) -- Supporters of a banned Islamist party in Pakistan have clashed with police and disrupted traffic during a march to the country's capital.