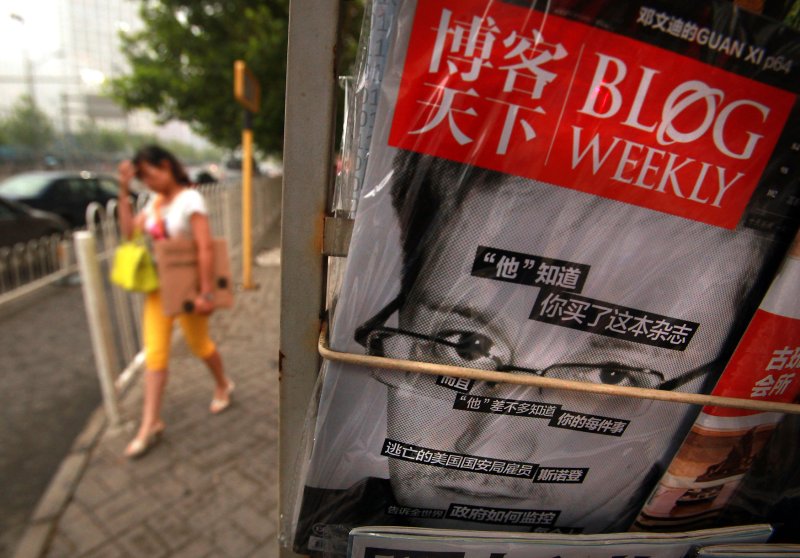 A popular Chinese magazine featuring a front-page story on American Edward Snowden is sold at a news stand in Beijing on June 25, 2013. UPI/Stephen Shaver | License Photo

Andrei Soldatov, a journalist who has written extensively about Russia's security services, said the FSB, the domestic successor to the Soviet Union-era KGB intelligence service, now controls the circumstances of Snowden's life since Russia granted him temporary asylum in August, The New York Times reported Thursday.

"He's actually surrounded by these people," Soldatov said, noting that Briton Sarah Harrison, an activist working with Wikileaks who has been seen accompanying Snowden, also is affected.

"When the FSB actually got him, they started to handle it their own way," Soldatov said. "This is the way the security services operate all the time."

On Thursday, Snowden's lawyer, Anatoly Kucherena, said his client landed a job with one of the country's major Internet companies, which couldn't be independently verified, the Times said.

At the same time, a news agency thought to have ties within Russia's security services, Life News, published a photograph it said showed Snowden on a cruise on the Moscow River beside the Kremlin.

Soldatov and others said the indications of life in the open could be misdirection or propaganda meant to create an impression of a happy asylum, the Times said.

"He's free, but he's not completely free," said Ray McGovern, a former CIA official and a member of the Sam Adams Associates for Integrity in Intelligence, which met with Snowden last month in his only verified public appearance since he received asylum.

World News // 19 hours ago
Congo declares second outbreak of Ebola virus
June 1 (UPI) -- As the Democratic Republic of the Congo neared declaring over an Ebola outbreak in its eastern provinces, health officials on Monday announced a new cluster has emerged on the other side of the African nation.