Edward Snowden living with protection at a secret location in Russia

MOSCOW, Sept. 17 (UPI) -- Fugitive secrets leaker Edward Snowden is free to move around Russia and is living with security protections at a secret location, his lawyer said.

"We believe the danger remains quite high and, as I see it, it is impossible at the moment to reveal where he's living or to talk openly about it," Anatoly Kucherena said.

Snowden, a former National Security Agency contractor who is wanted by the United States for leaking classified information on secret surveillance programs, has not been seen publicly since he arrived in Russia since June.

But Snowden, who was granted temporary asylum, is leaving his Russian home, The Guardian said.

"He takes walks, he can travel. He travels," Kucherena said. "No one has recognized him so far."

Snowden has received job offers and messages from Russians offering to help, The Guardian reported.

Putin: U.S. has refused extradition deal for Snowden Snowden was supposed to go to Cuba, not Russia 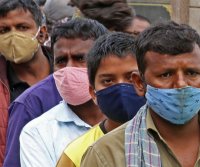