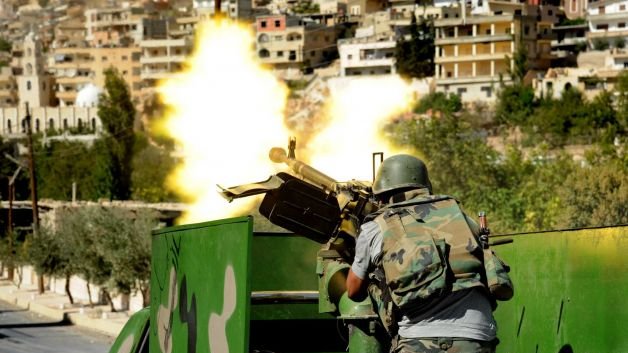 In this Sept. 7, 2013 photo released by the Syrian official news agency SANA, a Syrian military soldier fires a heavy machine gun during clashes with rebels in Maaloula village, northeast of the capital Damascus, Syria. Maaloula, a Christian town with holy sites for Muslims and Christians alike, sits 34 miles north of the Syrian capital Damascus. It had been under government control until a rebel attack last week initially repelled forces loyal to Syrian President Bashar Assad. Photo: SANA/UPI

MAALOULA, Syria, Sept. 11 (UPI) -- The fight between government forces and Syrian rebels to control an ancient Christian town went on while many villagers fled, the BBC reported.

Maaloula, a Christian town with holy sites for Muslims and Christians alike, sits 34 miles north of the Syrian capital Damascus. It had been under government control until a rebel attack last week initially repelled forces loyal to Syrian President Bashar Assad.

Concerns about damage to several Christian and Muslim shrines in Maaloula have also been reported but the BBC said there appears to be no damage to several holy sites in the town, the 3,300 residents of which have largely fled to escape the fighting.

War crimes and crimes against humanity have been committed by both Syrian government troops and rebel forces, a U.N. panel said Wednesday.

The panel said both sides had committed offenses such as torture, rape and indiscriminate attacks on civilians on a large scale, The New York Times reported.

The panel's report will be presented Monday to the U.N. Human Rights Council in Geneva.

The report was based on 258 interviews, including those in which adult detainees "regularly reported the detention and torture of children as young as 13."

The panel also reported opposition forces had conducted summary executions of captured government troops and were implicated in the mass killings of Shiite residents of one community in June.

The statement said an attack by the United States and other Western countries was "unacceptable" and could threaten the country's nuclear and chemical security.

RELATED Transcript of Obama's speech on use of force in Syria

The draft U.N. resolution would come from Moscow a day after U.S. President Obama said in a nationally televised address he would hold off on military action and pursue Russia's proposal for international monitors to take over and destroy Syria's arsenal of chemical weapons.

The draft resolution would also come a day after a U.N. Security Council meeting was canceled after Russia clashed with the United States and France over whether the resolution should be binding and whether it should threaten military force in case Syria does not comply.

France sought language that leaves military action on the table.

It said a diplomatic route would work only if the United States and its allies renounced the use of force, while Western diplomats insisted the threat of strikes was a critical ingredient in ensuring Syrian compliance.

Moscow said it would instead propose its own draft declaration.

Kerry said in a Google Plus online forum Russian Foreign Minister Sergei Lavrov, who he had just spoken with on the phone, "had some interesting observations about the ways in which he thinks we might be able to achieve this."

"He is sending those to us [Wednesday]. They'll be coming in formally during the course of the day. We'll have an opportunity to review them," he told the Google Hangout video chat.

"If we can, in fact, secure all of the chemical weapons in Syria through this method, clearly that's by far the most preferable, and would be a very significant achievement," Kerry said.

But he said a workable agreement would have to include an "ongoing verifiable process" with "unlimited" international access to all Syrian chemical-weapons sites.

"This cannot be a game. And that we have made very, very clear to the Russians," he said, adding he didn't know if a deal could be worked out.

He told pro-regime Lebanese TV station al-Mayadeen Syria would stop making the weapons, disclose the stockpiles' locations and turn over the arsenal to Russia, the United Nations and "other countries."

Obama said in his address from the White House East Room Tuesday night it was "too early to tell" if Russia's proposal would succeed, "and any agreement must verify that the Assad regime keeps its commitments.

"But this initiative has the potential to remove the threat of chemical weapons without the use of force, particularly because Russia is one of Assad's strongest allies," Obama said.

The president said he asked congressional leaders to postpone a vote authorizing military action -- a vote White House and congressional aides said he was almost certain to lose.

At the same time, he made a moral case for punishing Syria for its alleged deadly use of chemical weapons.

"What kind of world will we live in if the United States of America sees a dictator brazenly violate international law with poison gas, and we choose to look the other way?" he asked.

"Our ideals and principles, as well as our national security, are at stake in Syria, along with our leadership of a world where we seek to ensure that the worst weapons will never be used," he said.

Obama argued a military response was in the national interest, even though Syria posed no direct threat to the United States. 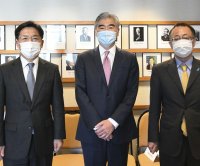