Egyptian woman cry after killing her relative after clashes broke out during a demonstration in support of Egypt's ousted president Mohamed Morsi, in Cairo Egypt on August 16, 2013. UPI/Ahmed Jomaa | License Photo

CAIRO, Aug. 18 (UPI) -- The threat of rooftop snipers led the Muslim Brotherhood to call off a series of protest marches around Egypt Sunday.

Egypt was braced for another day of angry street clashes between security forces and supporters of ousted president Mohamed Morsi, led by the Muslim Brotherhood.

Brotherhood leaders abruptly canceled the marches, saying they feared the protesters could be fired on by snipers in buildings along the routes, CNN said.

The Egyptian interim government installed by the military after Morsi's removal leveled the blame for the street violence on outside agitators. Officials also were considering legal steps to disband the Muslim Brotherhood altogether.

Minister of Social Solidarity Ahmed al-Borai said Sunday an official decision would be made by the government in 15 days after the issue is studied by the General Federation of non-governmental Organizations, the Egypt Independent reported.

Borai said the move would force the Muslim Brotherhood to reveal its source of funding and its official agenda. He said a court ruling would not be required because of "the crimes" committed by the organization.

"There will be no reconciliation with those whose hands have been stained with blood and who turned weapons against the state and its institutions," the radio quoted him saying.

World News // 34 minutes ago
Auction for Roman villa containing Caravaggio mural draws no bidders
Jan. 18 (UPI) -- An auction for a Roman villa featuring a ceiling mural by Italian painter Caravaggio that is at the center of an inheritance dispute was rescheduled after failing to receive any bidders.

World News // 10 hours ago
Russia moving troops near Ukraine for joint exercises with Belarus
Jan. 18 (UPI) -- Russia has moved troops to Belarus for joint military exercises that are raising worldwide concern over the possibility of a plan to invade Ukraine.

World News // 9 hours ago
Israeli study suggests 4th COVID-19 shot not enough against Omicron
Jan. 18 (UPI) -- A fourth dose of the Pfizer/BioNTech coronavirus vaccine may not be enough to protect people from getting infected with the Omicron variant of COVID-19, a new Israeli study released Tuesday suggests. 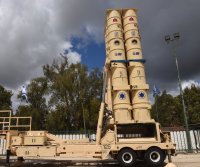 World News // 11 hours ago
Mexican soccer officials to ban fans for uttering anti-gay chant at matches
Jan. 18 (UPI) -- Mexican Football Federation President Yon de Luisa said on Monday it will start issuing five-year stadium bans to fans found to have made an anti-gay chant that has become popular at matches there.