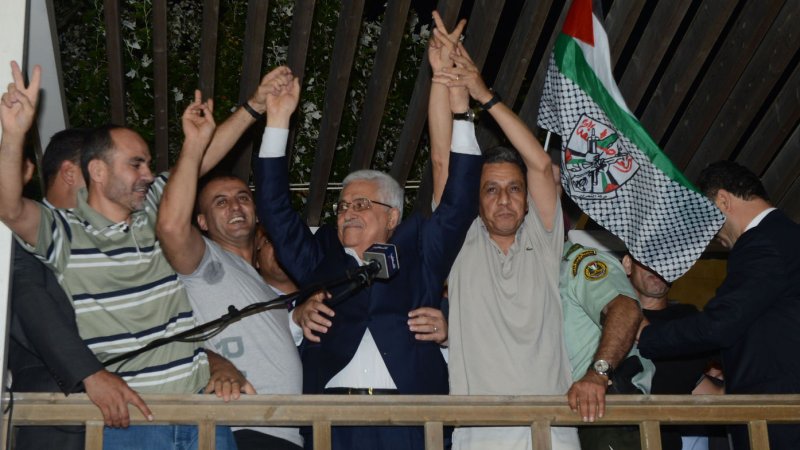 Hundreds of people, Palestinian Authority President Mahmoud Abbas among them, welcomed the inmates -- freed from Israel's Avalon Prison ahead of peace talks between the two sides -- when they arrived in the Gaza Strip and the West Bank, Ynetnews.com reported.

The Israeli news website said a convoy carrying 15 prisoners in vans with tinted windows arrived at the Erez checkpoint and was allowed to cross into Gaza shortly after 1 a.m. Wednesday. The other 11 were taken to the Beitunia checkpoint where they then made their way to Ramallah.

Ynetnews.com said some protesters tried to block the prisoners from passing but were removed by authorities.

"We welcome our brothers who have left the darkness of prison into the light of freedom and tell them they are the first but there are other brothers who too will leave soon," Abbas said. "We shall not rest until they are all with us."

The freed prisoners paid a visit to the grave of P.A. leader Yasser Arafat.

The news website said a rocket landed in an open area in the Sderot area about the time the prisoners were released.

Israel's Supreme Court, after studying a petition filed by the Almagor Terrorist Victims Association, found there was no basis to block the government's decision to free the prisoners, Israel Radio and The Jerusalem Post reported Tuesday.

The court ruling lifted the last stumbling block and cleared the way for the release.

"Despite this, all that is before us is the legal question of whether there is any basis to get involved in the government's decision to release prisoners in the framework of peace talks with the Palestinians," the court said.

The court noted while it understands the issue is a "sensitive and complicated one which lies at the heart of a public dispute," it found no reason to prevent the prisoner release.

"Our hearts go out to the families of the terror victims, whose anguish is greatest and about which we can do nothing to heal," the court was quoted as saying by the Post. The court described the release of prisoners guilty of committing grave crimes "the hardest kind of decision."

Before being released, the 26 prisoners were segregated at Ayalon Prison in Ramle in central Israel, where they underwent identification and medical checks. It was unclear whether they would be forced to sign a waiver agreeing not to wage attacks against Israel, a requirement for Palestinian prisoners released in past exchanges, Ynetnews.com said.

As a gesture to the Palestinians ahead of the resumption of peace talks, Israel agreed to release 104 Palestinian prisoners in four batches in the nine-month negotiation period. Palestinian officials estimate about 5,071 Palestinians are in Israeli custody, Ma'an News Agency said.

Talks between Israel and the Palestinians are to resume in Jerusalem Wednesday.

World News // 8 hours ago
Baby has surgery after parents lose fight to block 'vaccinated blood' transfusions
Dec. 9 (UPI) -- New Zealand's 6-month-old "Baby W" is recovering in a hospital after a successful life-saving surgery was performed against the wishes of his parents, who wanted to block the use of blood from vaccinated donors.

World News // 8 hours ago
France will distribute free condoms to fight rising STD rates
Dec. 9 (UPI) -- France will begin making condoms available for free to people over 18 and under 26 starting next month, in an effort to reduce the spread of sexually transmitted diseases.