The UMP, the French acronym for Union for a Popular Movement, is supposed to repay 11 million euros ($14.6 million) Wednesday, The Local.fr reported Tuesday. The money owed was for the party's campaign deposit for the last presidential election.

Sarkozy kicked off a fundraising drive this month after the Constitutional Council found the UMP would not be reimbursed for its deposit, because the party spent beyond legal limits during Sarkozy's unsuccessful campaign for a second term.

On his Facebook page, Sarkozy said problems with the UMP's finances put democracy at risk in France. The "Sarkathon," a nickname given by the French news media, raised 8.3 million euros ($11 million).

In a letter to his supporters, published in Le Parisien, Sarkozy said he was "greatly touched" by their generosity.

"I wanted to personally express my gratitude for the gift you have been kind enough to make. By your valuable support, you have demonstrated your commitment to your political family as well as to pluralism. This test has reinforced our convictions," he said.

World News // 45 minutes ago
U.S. embassy in Kyiv reopens with flag-raising
May 18 (UPI) -- Secretary of State Antony Blinken announced Wednesday that the U.S. Embassy in Ukraine's capital, Kyiv, has reopened for the first time since Russia invaded Ukraine three months ago.

World News // 15 hours ago
Turkey blocks NATO talks on Finland, Sweden applications
May 18 (UPI) -- Turkey on Wednesday immediately blocked the beginning of NATO accession talks for Finland and Sweden right after they submitted their applications to join the alliance.

World News // 4 hours ago
French government to appeal city's move to allow burqinis at public pools
May 18 (UPI) -- One day after lawmakers in Grenoble, France voted to allow Muslim women to wear burqini swimsuits at state-run swimming pools, the French government said Wednesday it will appeal the decision.

World News // 6 hours ago
British MP out on bail after rape, sexual assault allegation
May 18 (UPI) -- An unnamed British Parliament member accused of rape has been released on bail, Metropolitan Police confirmed Wednesday.

World News // 6 hours ago
At least 12 dead, several hurt after wall collapses at India salt factory
May 18 (UPI) -- A wall collapsed at a salt factory in western India on Wednesday, killing at least a dozen workers there and injuring several others, officials said.

World News // 8 hours ago
Russian soldier enters guilty plea in Ukrainian war crime trial
May 18 (UPI) -- A 21-year-old Russian soldier faces life in prison after he entered a guilty plea to killing an unarmed civilian during Russia's invasion of the country in the first war crimes trial of the war. 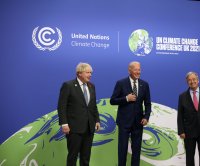 World News // 9 hours ago
U.N. global climate report shows severe impact on food security
May 18 (UPI) -- Climate change continued to heat up the Earth in 2021 as concentrations of greenhouse gases increased, sea ice mass shrank and ocean levels rose, according to a new report from the World Meteorological Organization.
Advertisement